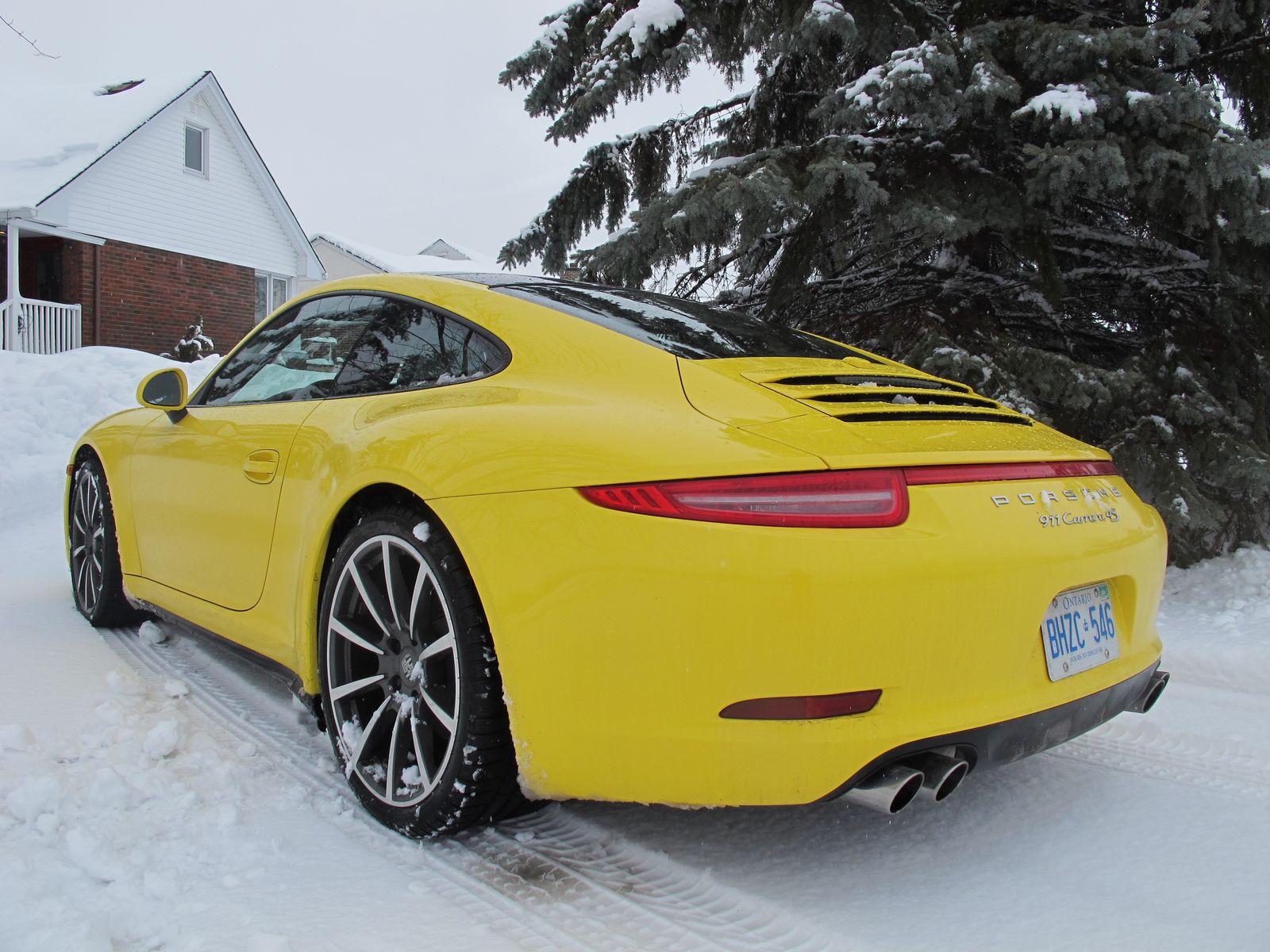 Most Porsche reviews I’ve written go something like this: saw it, drove it, loved it, you should get one. This piece will largely follow the pattern, so if you want to skip straight to the Porsche website to spec out yours, it’s Porsche.ca.

One thing, though: this particular test car costs $139,800, which — and I don’t mean to presume — could be a little out of your comfort zone. If that’s the case, check out the used Porsches at autotrader.ca. You may luck out.

What we have here is a Racing Yellow 2013 Porsche 911 Carrera 4S. This is the second year of the new “991” platform, lighter, sleeker and a little bigger than the previous generation.

The “911” means this model is an evolution of the iconic, rear-engine Porsche first introduced in 1965 (itself an evolution of Porsches back to the company’s formation). Almost all 911 models are “Carreras”, commemorating Porsche’s motorsports victories. The “4” means, among other things, that you can have great fun in the winter as it’s got all-wheel drive. The “S” means it’s got 50-more horsepower from its 3.8L flat-six cylinder engine than the base Carrera, giving you 400 hp and 350 pound-feet torque under foot.

The “Racing Yellow” is one of four no-extra-charge colours you can select when ordering your car (the others are red, black and white). Frankly, I doubt many people actually order Racing Yellow, but I reckon it’s a colour many people enjoy seeing. True, some may think it possesses a certain, “DID YOU NOTICE I’M DRIVING A PORSCHE!” attitude to it, but I suspect owners are rightly trying to please themselves, not others. If you don’t like it, get some Wayfarers. 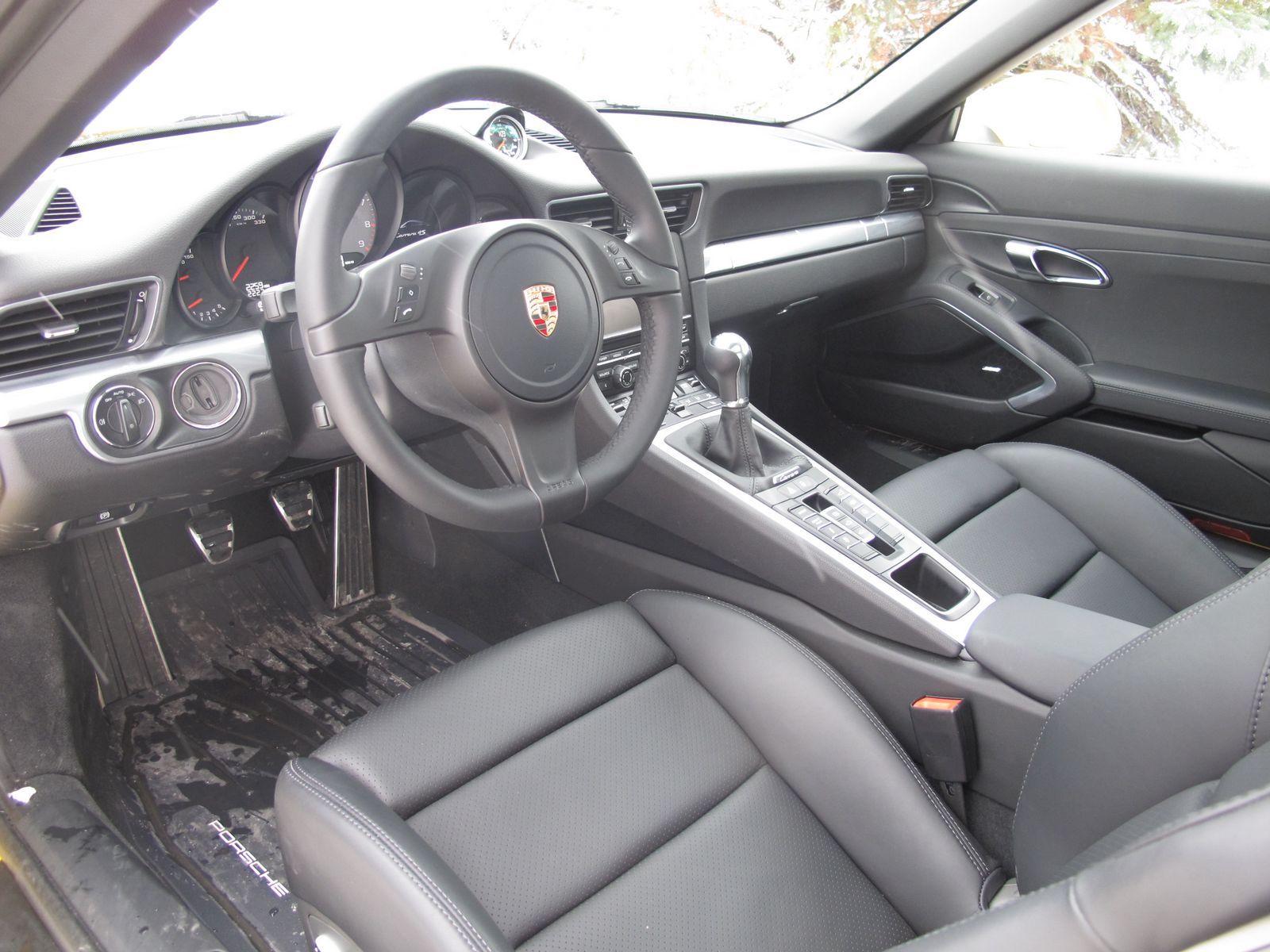 The base price for a Carrera 4S is $120,500, so its as-tested price here includes a modest amount for options that the typical buyer might check off. The big-ticket items are the $5,080 Premium Package (heated seats, auto-dimming mirrors, Porsche Dynamic Light System headlights in conjunction with 18-way power sports seats), the $3,370 Sports Exhaust, the $2,010 Sport Chrono Package, the $2,280 power sliding roof and the $2,770 Bose audio system.

In comparison, the $310 heated steering wheel seems almost a freebie; and similarly the 20-inch Carrera Classic wheels at $1,340 and the $710 multi-function steering wheel shouldn’t cause much internal debate.

So it was a bright, shiny thing that arrived in my driveway in the middle of a bitter Ottawa winter, and what a shame, you might think, that I couldn’t get to drive it properly (and by that I mean “on a dry surface, with the roof open to the sun, and the Bose and Sport Exhaust cranked up to 11).

I hear you. And furthermore, the day the p-car arrived, it was accompanied by 30 centimeters of the heaviest, densest snow you ever encountered.

Which got me to thinking…. Would I or wouldn’t I drive this car year-round if it was actually mine? Because the practice in my town is to store your Porsche over winter, and nobody (okay, maybe there’s someone, somewhere) drives their 911 through the snow, slush, mud, ice and salt common to an Ottawa winter. That means pretty-much from October to April.

Certainly, I didn’t see another one on the road during my week behind the wheel.

As I say, the snow came down thick and heavy. The roads wore a layer of ice-like packed snow that had cars sliding into ditches and buses jack-knifing. Plows had trouble getting through this goop, and snowblowers just gave up.

But the lone Porsche seemed to be okay.

After digging out the car, a push of the fancy Porsche keyfob unlocked the bright yellow doors to an exquisite black interior accented with polished aluminum. Using those core muscles you’ve been working on to delicately lower yourself into the sport seat, you can then savour this latest iteration of the 911 instrument panel and centre stack/console. It appears every bit as finely crafted and intelligently designed as the car’s price tag and reputation promises. It’s really the best modern 911 cockpit ever — no clutter here; just serious driving equipment, intelligently organized.

The form-fitting memory power seats are aligned with the steering wheel, so when you insert the key (it’s not really a key in the conventional sense; it’s the fob itself) into its receptacle to the left of the steering column, the seat moves forward, and the steering column positions itself to your pre-set location. The large and optimistically named sunroof at least highlights the finely crafted interior features, and adds an feeling of spaciousness.

Depress the clutch, turn the key and the car comes to life, the wipers removing the remaining snow (there’s no rear wiper; it’s an option and probably not too popular). The lights work automatically, as does the climate control; the Bose comes to life and you’re ready to go.

Ours was a seven-speed manual transmission model (7MT), its clutch possessing a substantial heft, but its shifter turning out to be butter-smooth. The new all-wheel drive system fitted to this latest 991 series Carrera keeps all its power and torque in the rear, unless conditions require help at the front. Consequently, most of the time the “4S” should drive very much like an “S.”

But there’s a graphic in one of the 911’s classic five gauges that dynamically displays where the power’s going when you’re underway, and in my case it was clearly hunkering down at all four wheels much of the time.

And so it was that this jewel of a car found its footing on the simultaneously slippery but sticky surface, both powering and finessing its way confidently through. I didn’t detect any wheel slip (I doubt you could induce it in this car if you tried), the 20-inch Pirelli Sottozero winter tires surely contributing, but the entire package working together to insist that this car, within reason, continues to go where you point it.

Did it get dirty? Oh, yeah. Did it care? Nope. Did I? Well, actually I thought it was just fine to be out and about in a Porsche during one of the most severe weather events we’d experienced in Ottawa for quite some time. Ground clearance was not an issue, although it’s absolutely no SUV so you don’t get stupid or you’ll damage the front valence pretty quick (I’d watch out for speed bumps, too).

But that wonderful Porsche solidity makes the 911 Carrera 4S fully functional even in rough winter conditions (during my time with the car, Porsche was running its “Camp4” winter driving program in the Laurentians, further making the point).

But fortunately, we did have some time on dry surfaces; driving up to Montebello in Quebec along the newly connected Highway 50. The Carrera 4S effortlessly runs through the gears, emitting a raucous, thrilling note through its optional Sport Exhaust system (which I mostly kept in the “on” position).

As this vehicle was fitted with the Sport Chrono Package, you could select the Sport Plus mode that sets the car up for track-style responsiveness from the throttle, transmission, steering and suspension damping. But there’s little you can do on a public highway to take advantage of this potential, except feel the car’s palpable urge to get going (now, if it was summer, I could shoot through Montebello and head straight for Circuit Mont-Tremblant where the Carrera 4S would make me look way better than I’ve ever been). Just so you know, this car has a top speed of 299 km/h, and accelerates from 0-100 km/h in 4.5 seconds.

As you may know, there is an “automatic” transmission available for this car, although that label does the gearbox no justice. It’s really a seven-speed, paddle-shifted, double-clutch transmission (the Porsche PDK) that you put in an automatic mode if desired. I’ve driven it, rarely put it in “auto,” appreciated and enjoyed the physicality of the gear changes and would consider it if I had to drive in stop-and-go traffic regularly. You get better fuel economy in the city, and a faster acceleration time (4.3 seconds, 0-100 km/h) compared with the 7MT, too. It’s a $4,660 option and they love it in Europe; North America not so much.

On a more mundane level, the two rear seats are good for very small children or one adult sitting sideways for short periods. The backs do fold down to provide extra cargo capacity, but it’s hard to access. There’s no hatch or opening rear window (the previous-generation Targa model has one).

While the navigation system is standard, there’s no rear camera. It wasn’t an issue, but the Koreans can include one in cars priced at the equivalent to the Carrera 4S’s sales tax, so it just seems stingy not to bundle one in.

The standard auto start/stop system is claimed to reduce fuel consumption by 16-percent in comparison to the outgoing model. It worked fine for me, not seamless, but good enough. My highway fuel consumption, by the way, was 8.1 L/100 km, which is excellent for a 400 hp supercar, in my view (official numbers are 11.3/7.5 L/100km, city/highway).

The cupholders continue to suck. I believe I myself could engineer better ones, so I have to think this is line in the sand for the boffins who design the car’s interior, and their position that you shouldn’t be sipping on a medium Tim’s while piloting their fabulous machine. “If you presume to, we’ll put the contents in your lap,” seems to be the attitude.

There’s no keyless entry and start. What can you say? The key’s gotta be on the left; you’ve got to turn it; it’s tradition. But it’s also inconvenient when there’s a way better technology available in the form of a transponder and button.

The control to heat and adjust the tilt/telescoping steering wheel is difficult to find, buried down by your left knee. Like the button to heat it, these steering wheel controls seem an afterthought.

The information display in the center stack (navigation, audio, climate, etc.) and the corresponding selectable display in the instrument panel can work independently. This is not common. Usually what’s in one display is duplicated in the other; but in the Porsche, you can have audio, for example, in the main display and a full navigation map in the minor display in front of you. This is great.

As far as driving this car year round in area where the climate is not favourable, I look at it this way. I wear an Omega Speedmaster watch that I bought new three years ago. I’ve worn it pretty much every day and now it looks kind of beat up (a colleague recently asked me what vintage it was…).

But it’s a Speedmaster. NASA took these things to the moon. They’re tough, and you can always buff it up to like-new if you’ve a mind. In the meantime, I want to enjoy it.

I think this analogy transfers to the Porsche. These are not fragile machines; they’ll take what you dish out (didn’t Top Gear drop one from a hovering helicopter, and drive it away?). So I reckon if you’re fortunate enough to own one of these cars, especially if it’s been a lifelong goal, then you owe it to yourself to defy the elements and enjoy it as much as possible. Life is for living; Porsches are for driving. The latter enhances the former.