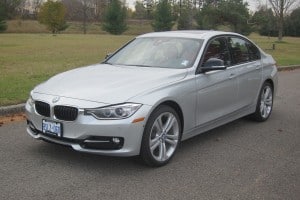 New to the Canadian market this model year, the 2014 BMW 328d offers no surprises when it comes to design, equipment and quality associated with this luxury brand. The big news is under the hood, where the familiar gasoline engine is replaced with a 2.0-litre, four-cylinder turbocharged diesel.

Common in Europe for many years (over 50-percent of non-commercial vehicles are diesel-powered there), diesel is still something of an exotic in North America. But that is changing as consumers discover the attributes of diesel versus gasoline (for example, Volkswagen is seeing record sales of its new Passat TDI, even in the US). A major benefit is that diesel provides superior fuel economy, and happily it doesn’t achieve this by sacrificing power. In the 328d, 181 horsepower and 280 pound-feet of torque provide good acceleration both from a standstill and when passing.

On the highway I’m experiencing fuel consumption of about 6.6 L/100 km, translating to a cruising range of close to 1,000 kilometres per tank. In the city, I’m averaging around 8.1 L/100km. For a luxury sedan of comfortable proportions, these are very good numbers, with further savings realized if the price of diesel fuel remains between regular and premium grade gasoline (all BMW gasoline-powered vehicles require premium fuel).

I should say from the get-go that I think consumers are well served with a diesel option, although being a BMW the price of admission for this car is high. The 2014 BMW 328d AWD starts at $47,700, with our test vehicle nudging $60,000 ($58,260, including freight, to be precise). So yes, there’s an irony that the savings in fuel, at least in the short to midterm, are more than offset by the price of the car. But luxury brands come with luxury pricing, so let’s see what else this BMW 328d offers.

There is a palpable solidity that you experience when driving a BMW, and the 328d AWD is no exception. The doors close with a satisfying “thunk,” and the car feels like all its bolts were tightened an extra quarter-turn compared with most mainstream vehicles. When cruising at highway speeds, the 328d exhibits a feeling of heft and lightness of operation; comfortable, smooth ride and responsive handling. It feels different than mainstream-market cars, as it should.

On a recent trip to Toronto and back from Ottawa, my rear-seat passenger fell asleep for a couple of hours, waking to comment that this back seat was the most comfortable she’d ever experienced. Subjective, I know, but I think valid feedback from someone occupying the seat for 500 km, plus traffic jams.

I found the driver’s seat equally comfortable, although fortunately in my case, the comfort and support of the seat helped maintain alertness.

I was pleased to note beverage containers in each door, and that they were large enough to accommodate my Camelback water bottle. On the centre console there are two more beverage holders that are accessed by removing a panel that doubles as a catch-all for keys, wallet, phone, etc.

The problem with the removable panel (other than that it’s an either-or proposition) is that if you remove it, there’s no place to put it. There should be a pocket or something on the side of the transmission tunnel; otherwise it ends up on the floor. Alternatively it may just end up under the seat or in the glovebox. My experience was to use the cupholders to hold coffee and to hold odds and ends. Still, it looks nicer with the cover on.

The remote keyless entry is a convenience which defaults to unlocking the driver’s door only. This is a useful security feature, but if you’d like all your doors to unlock at once, you can change the default in Vehicle Settings, accessed via the iDrive interface.

That interface, by the way, is now very good. It easily paired my iPhone, enabling me to make and receive calls and stream music without fuss, and unlike some competitive systems, it’s straightforward to change radio stations, set navigation guidance and alter climate settings. Eight easily programmable buttons speed up the process even more, and can be used to tune radio stations, CD titles, telephone numbers or destinations. Voice activation adds yet a further set of control options.

Our test car is also equipped with the $850 ConnectedDrive Services package that includes BMW Online, Advanced Real Time Traffic Information, Concierge Services, Remote Services, Internet, BMW Apps and Convenience Telephony.  This is worth elaboration. At first, I didn’t really see what you were getting for the extra dollars, but there’s a feature called Traffic Alert and Traffic Summary that’s just brilliant. Everyone will want it.

Paraphrasing the BMW description, this is what you get:

BMW Online – Is a suite of information services that is accessed via the vehicle’s built in 3G SIM card. You can access useful info such as weather forecasts, Bloomberg stock indices, Google Streetview, Panoramio, Yelp and even find local businesses with Google Local Search. More importantly, you can also access CBC/Radio-Canada headline news articles for the first time in any car.

Concierge – Connects you to a live agent at the BMW Assist response center. They can help you find the nearest restaurant, bank, gas station or any other point-of-interest. They can then send that destination directly to your navigation system (I have used this one many times – it’s brilliant!).

Convenience Telephony – Offers an extended and more advanced Bluetooth experience. You can use features such as Office that allows you to access emails/text messages from your phone. You can compose and send emails/text messages via voice dictation. Convenience Telephony also allows you to stream your music off your smartphone wirelessly over Bluetooth.

Internet – A full, unrestricted browser that uses the 3G SIM card built into the vehicle. Data costs are covered by BMW Canada and there are no limits to how much browsing a customer can do. This feature is only useable when parked.

Here’s an example of how AARTTI works. The Traffic Summary overlays your navigation display’s map with green, yellow and red lines. These are representations of traffic volume, with roads marked red being places you don’t want to go.The system can use this information to re-route you around obstacles when it’s in guidance mode, but I think even more useful is that you can see, at a glance, the volume of traffic 10, 20, 50 or a 100 km ahead of you.

I only discovered this on the way back from Toronto. On the way there, we were stuck in stop-and-go traffic on the multi-lane, controlled access Highway 401 for 45 minutes (it was due to construction). What I wanted was a bird’s eye view. How long was the traffic jam? Should I get off the highway and try another route? Would there be an equally daunting obstacle if I did?

On the way back to Ottawa we encountered a similar problem of even larger proportions. By this time I’d discovered Traffic Alert and Traffic Summary and I had my bird’s eye view. I could see that the stop-and-go traffic extended about 30 km ahead. I could also see a route to the north that paralleled the highway was marked yellow, with some of the exits marked red as people left the highway to get to that alternate route (it’s a dynamic system). But I could also see that proceeding over the popular alternate route to the next intersection north would get me to a road marked green, and normal traffic flow.

Using this information I was able to confidently exit the highway at a low-volume ramp, ignore the busy first option and drive about five kilometres to the low volume alternate route, where I turned east. I headed south after about 20 km, which was beyond the major traffic jam, according to Traffic Alert and Traffic Summary. And it was right!

As I say, this is a terrific feature, all hands free and simple to use. Of course, the system’s only as good as the data going in, but it worked a charm for me. Similarly, the other ConnectedDrive features are both useful and helpful on the road. The Concierge service is pretty much the same as GM’s OnStar, without monthly fees.

Regarding the engine, it is a bit noisier than a gasoline power plant, although at cruising speed it’s barely audible. It starts readily, however, with no need to wait for a glow plug to warm the fuel injectors. It achieves operating temperature quickly in cold weather, so you get heat without having to wait too long (a Volkswagen Golf TDI, in contrast, uses glow plugs and takes a long time to warm up, in my experience).

Power is delivered as required, the lusty torque propelling the 328d with authority when passing and accelerating at speed. It can seem a bit lazy off the line, however, unless you’re more aggressive than usual with your right foot. There is a normal/Sport/Eco mode, and Sport gives appreciably better throttle and steering response. “Eco” takes away whatever sporty edge the car has, but maximizes fuel economy which is very good, but not as good as some other diesel powered cars. The 328d defaults to “Normal” when you shut off the engine.

On the road, the Blind Spot system uses yellow lights in the rear view mirrors that alert you to vehicles which may be in your blind spot. This is a useful technology that is a “must have” for some people I know. I’m not sure why this system isn’t always on in the BMW, though, requiring a press of a button each time you start the car. It should be “defaultable.”

All the mirrors, by the way, are auto-dimming, which is appreciated when driving at night, and the cruise control is a model of simplicity to use, although it’s not an “active” system that maintains distance between you and the vehicle ahead (the 328d does include “dynamic” cruise control, which, when activated slows the vehicle when cornering if required).

I’ve found on several occasions that Park Assist proximity sensors beep annoyingly as you move close to a vehicle, or some other obstacle. You’ll get beeping from the side, front and rear on occasion, and it just becomes annoying. You can turn the system off, but if you change gear, it turns itself on again. And it defaults to “on.” Don’t get me wrong: on occasion the system is very useful (warning that someone is walking behind your car, for instance), but at other times it devolves into a cacophony of distracting audible alerts. Another minor gripe: the backup camera should include grid lines. They work better.

Finally, the auto start-stop system is a useful fuel-saver that seems to work a little more smoothly than it did in the 2013 BMW 320i I recently drove. What would be better is if it wouldn’t shut the engine off so quickly. When stopping at a controlled intersection, for instance, one’s tendency may be to stop, creep forward a bit, stop, move ahead, and so on. With the engine automatically shutting down and restarting every few seconds, it’s yet another distraction. You can defeat the system with a button on the dash, but it would be good to maybe have the engine shut down maybe after 10 seconds, rather than three, or make the interval driver selectable.

I haven’t mentioned the LED puddle lights. They’re situated under each door handle and illuminate as you approach the car (you’ll need to use your keyfob to unlock the doors as you walk toward the car, rather than waiting until you get to the car to use the auto-unlock feature). Everybody comments positively on these, which help light your way in the dark and look most impressive.

Winter has now arrived in Ottawa, and not gently. Winter tires are therefore in order, and our 2014 BMW 328d test drive will conclude with a focus on vehicle dynamics, winter driving and more thoughts on the driver interface. 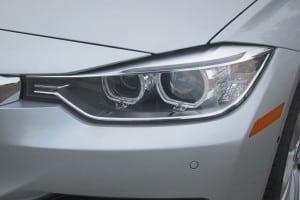 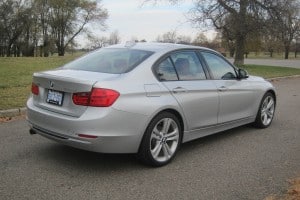 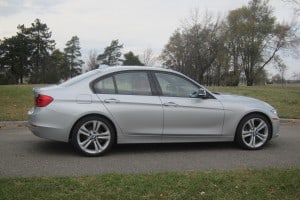 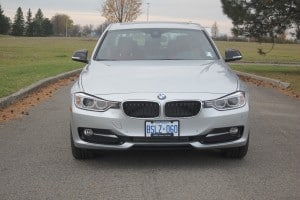