Beam me up, Subie! XV Crosstrek gets hybridized 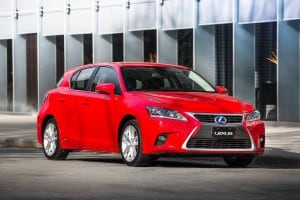 The Lexus CT200h is a compact four-door sport wagon based on Toyota’s ultra-reliable Prius architecture. Lexus, is Toyota’s luxury brand, and the “h” in CT200h means “hybrid,” so this could be a good combination!

The CT200h was introduced in 2010 as a 2011 model, and while it has been updated since then, it’s remained fundamentally unchanged. Off to a good start, sales took a dip in 2013, but the 2014 model now wears the new Lexus “spindle” grille, a more aggressive design featured on all Lexus cars, and there’s a sportier “F Line” model available with a firmer suspension and special trim items.

Power is rated at 134 horsepower, which admittedly won’t win many races, but is both adequate for general duty and very fuel-efficient. Officially rated at 4.5/4.8 L/100km, my real-world driving returned a still impressive 5.4 L/100km in mostly city driving. 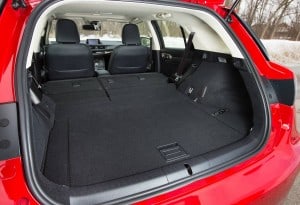 Personally, I like the look of this car (especially in red!) and the utility of a sport-wagon style of vehicle (there is no sedan version). Surprisingly (given that it’s a hybrid) there’s some useful cargo room in the CT200h with the rear seats up or down. It’s roomy for rear-seat passengers as well. Trips to Ikea, and various garden centres proved the CT200h’s ability to transport the usual purchases with ease.

Inside, the driver interface is easy to understand and to use. The gearshift is all-Prius, being a small joystick affair that you flick into place with your finger. No brawny shifter here. 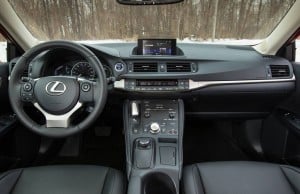 No navigation in this car, and not available as an option, either (you have to buy the Technology Package vehicle). Too bad, really, as sticking a Garmin or whatever on the windshield seems a bit déclassé for a Lexus to me.

And while the interior is nicely presented, it’s not as well appointed as a Lexus IS, for instance. Surfaces are a bit cheaper, edges aren’t as well finished, materials not as substantial. It doesn’t really have the substance and luxury feel of other Lexus models.

But it is quiet like you wouldn’t believe. Often driving in EV mode (electric only), you sometimes cannot hear this vehicle as it glides silently down the road. Which means you have to pay special attention to pedestrians, one of whom was about to walk in front of the car before being pulled back by a friend. He heard nothing; he didn’t think to look; I swerved.

Speaking of EV mode, the CT200h with often switch from gasoline to electric (or a combination of the two) in normal driving. It does this seamlessly, maximizing fuel economy as it is programmed to do. You can monitor its operation on the display, and track your current and past fuel consumption. 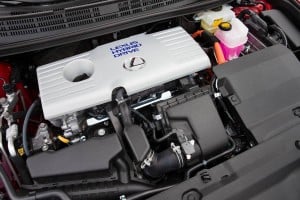 You do have an EV switch on the centre console, however, which will cause the CT200h to run on battery until power is depleted (it’ll switch back to hybrid mode automatically in that event), although I found that in extended stop-and-go traffic, I could run on EV for at least a kilometer just by moderating the throttle. Nice. Not using gasoline!

For additional fuel economy, there is an Eco Mode that can be selected, but it seemed to halve the horsepower and I couldn’t see much of a fuel consumption improvement.

I know, lots of talk about fuel economy, but really, that’s a big reason people buy hybrids, right? As far as handling is concerned, I found the CT200h sharp and direct. Cornering seemed quite sporty to me, the steering precise and responsive. I thought it was an entertaining car to drive; just not particularly quick off the line or when passing.

In addition to the Eco mode, there is a Sport mode that further sharpens the throttle response if you prefer. 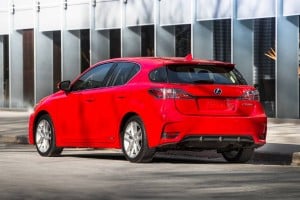 After driving some real gas-guzzlers recently, and paying close to $1.50 for a litre of premium fuel (hope that doesn’t sound inexpensive in the future…), I’m thrilled to put $24.00 in the tank after driving nearly 300 km. I liked this car a lot, and so did many people I encountered. They were intrigued by the unusual combination of a luxury nameplate, the youthful design, the hybrid technology and the price point (although you effectively have to pay nearly $10,000 for a navigation system).

I would like to see the typical Lexus luxury feel better rendered in this car, however. BMW seems to manage this even at the entry-level of their vehicles. That said, no other luxury brand offers a vehicle like the CT200h. It’s kind of a sheep in wolf’s clothing. Delivers the goods, though!