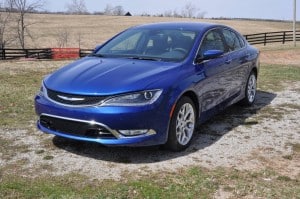 It’s nice to see Chrysler coming along. For a while, there, the company was flying dangerously close to the ground and a crash-landing seemed imminent.

But what a difference a few years make, along with an Italian company (Fiat) led by a Canadian, no less! Well, Italian-Canadian…

The Chrysler 200 is the first really new Chrysler for many years. It’s a blend of European driving dynamics and American engineering and design. Built on an Alfa Romeo-derived chassis, the 200 is all-American otherwise. Assembled at the revived and reborn Sterling Heights plant just outside Detroit, the 200 expresses the blend of cultures and technologies that comprise the new Chrysler.

It’s a healthy step up from the outgoing 200. 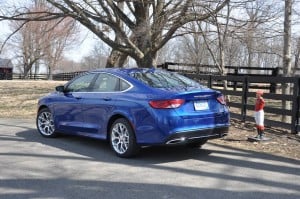 I like the design. It’s smooth and aerodynamic, and more complex than your first impression may suggest. Fit and finish inside is impressive, with all materials looking more expensive than you’d expect from the 200’s base price of $22,495. For that you’ll get the 2.4-litre, 187 horsepower four-cylinder “Tigershark” Multiair engine (new to the 200 this year) and front-wheel drive, along with “basics” like air conditioning, power windows, Bluetooth “Uconnect” connectivity, and a tilt/telescoping steering wheel. You’ll also get the standard electronic parking brake and LED rear lights.

The “volume seller,” as they say in the industry, will be the $24,995 “Limited” version, but for my money I’d go for the top-of-the-line 200C. You’ll pay $30,495 – still a bargain given the standard equipment – and get all-wheel-drive, leather upholstery, aluminum wheels, a heated steering wheel, remote start, auto dimming mirror, automatic climate control and power driver’s seat. You’ll still have to add $595 for the navigation system to complete the package, however, and I’d also suggest the excellent 3.5L “Pentastar” V6 engine as well. Its 295 hp really transform the driving experience. You’re looking at about $33,000 for a 200 done the way I’d like it.

Both engines are mated to a new nine-speed automatic transmission, and a smooth-shifting unit it is, controlled by a rotary knob on the centre console that may take some getting used to. No manual option for the 200, but apparently only a tiny percentage of people would choose this anyway. 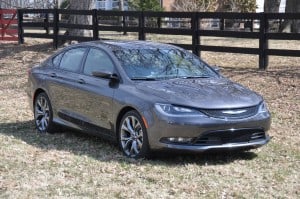 alloy wheels, black and navy blue interior and other blacked out trim items. It’s also fitted with a sport suspension and a driver selectable sport mode that tightens up the steering, makes the throttle response more immediate and changes the shift points for an altogether more aggressive experience when driving the car. It also adjusts the vehicle stability control enabling the driver to push the car harder through corners before the electronics intervene.

Frankly, I’m not sure many midsize family car buyers would be interested in a vehicle with these attributes. My sense is that the typical family sedan buyer would want precisely the opposite: more control, less aggression, more predictability and certainly not the ability to slide their 200 around corners. Those who would – mostly men, right? – would be quickly diverted by their spouses toward the 200 Limited or 200C. Still, it’s thoughtful of Chrysler to make the option available for those who like a little spice with their ride, and I guess it speaks to the character of the 200 that Chrysler wants to project. Its V6 is the most powerful in the segment, after all.

On the road, the 2015 Chrysler 200 is sure-footed and quiet. Acceleration, turning and braking are all impressive, the cabin a pleasant place to be. Trunk space is generous and the rear seats of course split and fold for extra cargo capacity.

As implied above, it’s the V6 that best suits the 2015 Chrysler 200. Chassis, transmission and engine cohere into a tight, 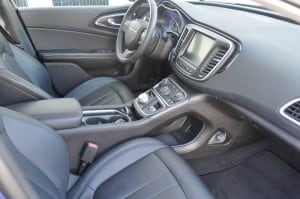 responsive and entertaining driving experience. You’ll pay a slight fuel penalty compared with the four-cylinder, but it’s still regular grade fuel that’s specified, so there’s a savings at the pump from that perspective.

Competitors are the Honda Accord, Toyota Camry and Ford Fusion, and my pick among those three would likely be the Ford Fusion, which I still think is the best looking midsize car on the road today.

But dollar-for-dollar, I think you’ll find the Chrysler 200 beats the Fusion on price and equipment. And it’s something of a looker itself.