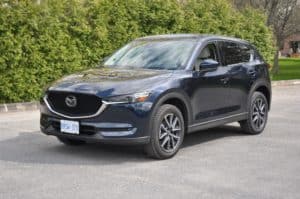 Stylish, roomy and very well equipped, the 2017 Mazda CX-5 GT is arguably the best compact SUV in its segment. Not that it’s so compact anymore, as the entire segment has seen vehicle dimensions increase over the past few years. I’m not complaining, though. The size of the CX-5 is, as the nursery rhyme goes, “just right.”

Built for five passengers, and priced at $38,330 including freight/pdi and an optional $1,600 Technology Package, my test-drive model is the top-of-the-line, fully loaded CX-5. All new for 2017, it’s therefore the latest iteration of the CX-5, and because of that, many of the newest safety and technology enhancements seen in the luxury segment over the past few years have now happily trickled down to this mainstream brand. In short, you won’t be out-of-date when you drive your 2017 Mazda CX-5 off the lot. 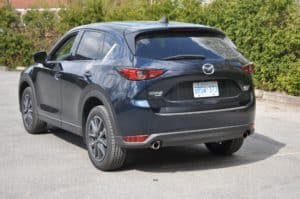 Powered with a fuel-efficient 2.5L four-cylinder engine, the CX-5 puts a smooth 185 horsepower and 185 pound-feet of torque into its six-speed automatic transmission and all-wheel drive system. At 1,669 kilograms, the CX-5 is heavy enough to feel substantial, but light enough to deliver nimble handling. Fuel consumption ratings are 10.2/8.3 L/100km city/highway using recommended regular grade fuel. I got 9.8 L/100km in exclusively city driving, suggesting that you may be able to better the highway estimates as well. The tank holds 58L, by the way. 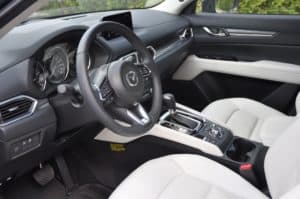 Enumerating all the features of the CX-5 GT with Technology Package is more efficiently achieved by identifying what it doesn’t have. Ventilated seats, for instance … it doesn’t have those. Heated windshield and sunshades for the windows. Doesn’t have those, either. Oh, and it won’t park itself. 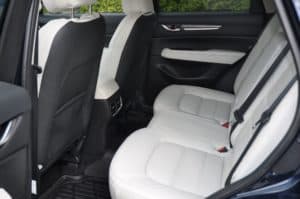 But you get the point. Perhaps taking a page out of the Hyundai playbook, Mazda is going huge on standard features, and bettering its competitors with a very useful 2,000-pound towing capacity. The CX-5 will actually haul a decent-sized boat or small camper trailer, which really expands its utility (and would even more so if a towing package and roof rails were available. Later this year, according to Mazda). 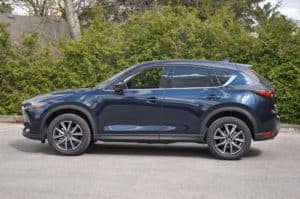 On the road the CX-5 soaks up the bumps, its large 19-inch wheels and low-profile tires not producing a harsh ride at all. The throttle is responsive; handling is sharp and braking sure. Visibility is good all around, and the wide-angle rearview camera is a useful aid when backing up. The cabin is very quiet when underway, with engine and road noise virtually absent. 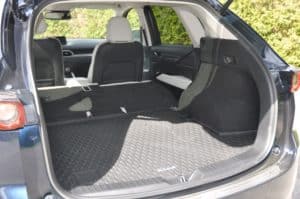 Cargo capacity is generous. There’s lots of room behind the rear seat, which opens to a cavernous area when the rear seats are folded (almost flat, but not quite). Ingress and egress are accomplished without drama, helped by the wide opening angle of front and rear doors (you’d be surprised at how rare this is).

The doors do sound a bit tinny, though. I guess they’re light; I’m sure they meet all the crash requirements, so no worries there; they just feel a bit insubstantial. Speaking of crash testing, at the time of this writing the US National Highway Traffic Safety Association hadn’t tested the 2017 Mazda CX-5, but gave the 2016 version four out of five stars. Check their site at www.nhtsa.gov for an update. With all the added technology and features of the 2017 model, expect five out of five stars, but it’s not confirmed yet.

The Mazda Connect infotainment system is one of the easiest to use, comprising of a knob and three buttons on the centre console and a high-mount, high-definition display. Changing radio stations is a bit clunky, but thankfully, at least, there is a volume control knob. No CD player is available, which is now typical across brands.

Styling is sleek and modern “in the Japanese aesthetic,” according to Mazda which describes it as “Kodo, Soul of Motion design.” It looks a bit sinister to me, along with the dark-tinted windows and standard black wheels (there’s a hint of silver to give some relief, but just a hint). There are a couple of optional wheels available at extra cost, but they’re black, too. I guess it’s good for hiding brake dust. No-one’s going to think the CX-5’s cute, that’s for sure, which I guess is the intent. Interestingly, given all the fancy equipment, only the driver’s window has an auto up/down feature. It’s a little thing, but the penny-pinching absence of auto up/down for all windows is surprising.

I wasn’t able to spend time on the highway in the CX-5, but I expect it would be a pleasure to drive on the long haul. The seats are comfortable, driving position very agreeable, ride smooth and you won’t want for amenities.

Personally, I think the CX-5 is terrific value. Love the Head-up Display. You could replace most of the instrument cluster with one of these, I reckon. And really impressed with this vehicle overall. A very competitive package from Mazda! 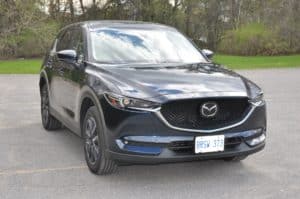