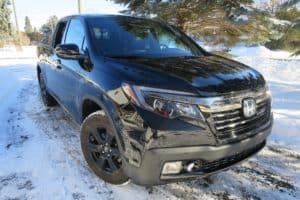 Way back in 2006, Honda introduced its Ridgeline pickup truck to many a raised eyebrow. Sorry, Honda, it just looked weird!

But this was nothing new for Honda which three years earlier brought the quirky Element to market, hot on the heels of its very weird Insight. Of course, Honda also made striking cars like the S2000, so clearly there was some kind of division among the company’s designers. The Ridgeline came from the nerdy weird group, and many critics figured it would last a few years, and then quietly go away.

Ten years later the 2017 Honda Ridgeline is still on the road and it no longer looks weird, which is not, however, because people have come to love its unusual lines. No, the fact is it’s been redesigned and now looks quite handsome, really, although it still cuts a distinctive profile from all angles. It’s just that it’s a bit more conventional looking. 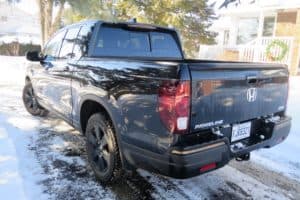 And apparently this is a brilliant stroke as sales have shot up since its introduction mid-2016, completely reviving the viability of the model.

Fans will be pleased to know that Ridgeline’s progressive and clever features remain. It’s still based on a unibody truck platform (albeit the revised second generation) with fully independent suspension. The ride, for a truck, is excellent. No bounce and jounce, just smooth sailing and a pleasant isolation from road noise and surface irregularities. And good handling, too. 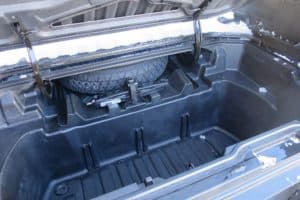 Also as before, this truck has a lockable trunk that resides under the five-foot box. Drop the tailgate, pull a handle and half the floor lifts to reveal a vast storage area between the rear wheels (it can do this because of its unique platform, the midship location of the gas tank, and the independent rear suspension). And you don’t have to drop the tailgate with a Ridgeline; you can open it from the side, like a door. How smart is that? 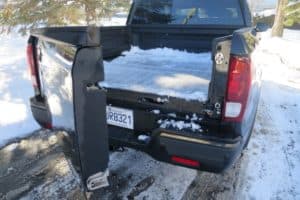 Under the hood is a 3.5-litre V6 engine with cylinder deactivation to maximize fuel economy. A new six-speed automatic transmission manages the 280 horsepower and 262 pound-feet of torque generated by the engine. The Ridgeline will tow 5,000 pounds, should you have a good-sized boat or trailer, and I achieved about 14 L/100km, regular fuel, in the city. 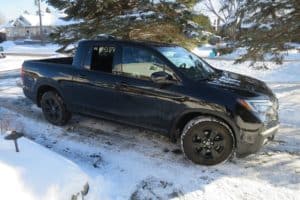 My test drive version was a $48,590 Black Edition, which is pretty much the same as the loaded $47,090 Touring model, but with black wheels and a black interior with discreet red accents. This Ridgeline had everything, including rear heated seats, heated and ventilated front seats, navigation, sunroof, heated steering wheel, leather, all the electronic safety technologies and multiple conveniences including a preponderance of holders for your drinks, plugs for your devices and separate climate zones for each front passenger and rear passengers.

If you can do without all the bells and whistles, Ridgeline still seats five adults comfortably, has standard all-wheel drive and starts at $36,590 for the LX model.

I drove mine in very poor conditions — ice, snow, slush, rain – we were getting it all. The Ridgeline felt stable and safe throughout. Very poised, very competent. It has a range of electronically controlled drive modes: mud, snow, Eco, sport, etc., selected with a button on the console that can tailor the throttle response and shift points to specific conditions, but I found it capable regardless. I did run it in Eco, however, as I was finding the Ridgeline a bit thirsty.

In everyday use, you may be limited by insufficient cargo storage when passengers occupy the rear seats. It may depend on the weather, but bed trunk or not, this is a truck and the bed is exposed to the elements. If you’re carrying cargo and passengers, I’d suggest a tonneau cover for the bed (Honda offers one) to maximize the utility of this vehicle. 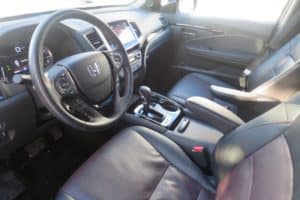 The big navigation screen is easy to read and does multiple duty as a display for audio, vehicle settings, climate, and drive data. Other than physical controls for the climate system (which is kind of odd when you think about it, as these are basically “set and forget” controls), everything else is touch-screen operated. This will drive your passenger nuts and maybe the driver, too. I didn’t like it; your hand is affected by the motion of the vehicle, with the result that you spend too much time aiming at the screen as opposed to simply flipping a switch or turning a knob.

But that’s what you get with any Honda now, as they’ve pretty much standardized this interface across the line.

Adapt to the interface and if you’re in the market for a smart, modern alternative to the standard pickup truck, the Ridgeline will surely impress with its capability and, yes, its looks. Chunky, rugged, comfortable and clever, it’s a smarter pickup alternative.