Speed Demons: Boomers to the rescue 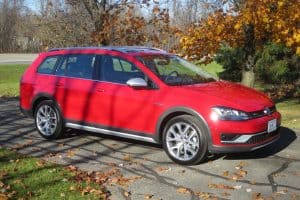 As new car prices seem to fall ever lower (for their base models, at least), my as-tested $38,215 Volkswagen Golf SportWagen “Alltrack” seems like something of an anomaly. Yes, it’s definitely a pricey VeeDub, with its MSRP including a couple of options nudging into the near-luxury segment. But if you simply like the look and practicality of a wagon, indeed you can buy a front-wheel drive Golf SportWagen, upon which the Alltrack is based, for $23,145.

However, my partner, already a VW owner, loved the look and drive experience of this wagon and with us being the owners of a small camper trailer, her first question was, “Will it tow?” 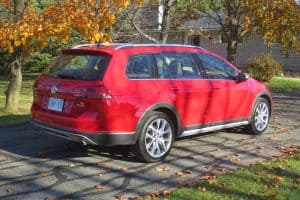 The answer’s an unequivocal no. Zero tow rating. Apparently in Europe it’s rated to tow 2,000 kilograms; in Australia 1,500 kg, but here, presumably towing will void your warranty and obviously no VW approved tow package available. So as far as being a cool SUV alternative goes, the Alltrack’s a sheep in wolf’s clothing and is off our list of potential buys. We’ll have to wait for the new Volkswagen Tiguan (assuming it still tows…) but for those who like the outdoors a little less than the Alltrack commercials would imply, it does, as I say, have other attributes.

Basically, what you have here is a mid-range German Subaru Outback equivalent that is much sleeker, leaner and more refined than the Subie. I think the exterior design’s terrific and the interior looks and feels closer to Audi than humbler VWs. 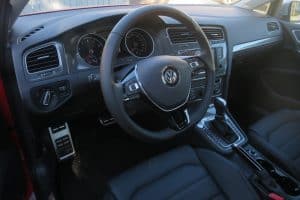 That interior, by the way, features a wonderful and simple dashboard whose instruments are easy to read, with controls that combine knobs and switches with touch-screen should you want it. Compared with the overwrought lightshow in the Subaru Forester I recently tested, this is a model of sophistication and calm. Competitors should look here for inspiration.

Under the hood, the 170-horsepower four-cylinder engine delivers an estimated 10.6/8.0 L/100km, city/highway on regular fuel and seemed perfectly sufficient to me. Mated to a delightful six-speed twin clutch automatic, I prefer this type of transmission so much to the CVT’s we’re being forced to buy from competitors.

On the road, the Alltrack is smooth and composed, quiet and responsive. It feels pretty much like a regular SportWagen, in my view, with slightly better outward visibility due to being a little taller than the wagon. 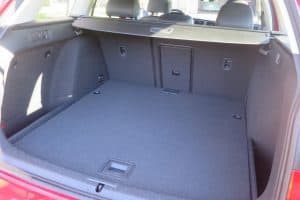 But the vaunted “extra ground clearance” of the Alltrak amounts to only 20 mm more than the Golf SportWagen, giving a total of 175 millimeters. This falls well short of the Subaru Forester and Outback at 220 mm. And those vehicles can at least tow something (1,500 lb for the Forester, 2,700 lb for the Outback).

So for me the Volkswagen Alltrack’s rugged outdoor credentials are mostly marketing hype, but if you like the image, the vehicle will likely be a superb family hauler in everyday driving. 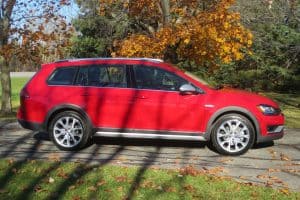 And newsflash, the Alltrack was voted 2017 Best New Large Car by the Automobile Journalists Association of Canada (www.ajac.ca), getting top marks for exterior styling and powertrain.

Base price: $35,295
As tested: With Driver Assistance Package and Light and Sound Package: $38.215 plus freight/pdi
Country of origin: Mexico