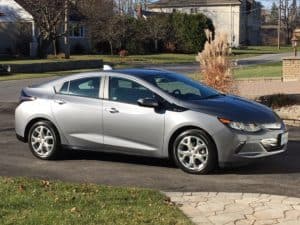 After many years of test-driving cars and writing review articles for various Canadian media outlets, I’ve finally bought a new car. It’s a 2018 Chevrolet Volt, a model that’s interested me since its introduction in 2011, and even before that, actually, as a concept shown at the Detroit Auto Show in 2007. Then it was a pet project of General Motors’ colourful vice-chairman Bob Lutz, making a strong and prescient case for an electric future for GM. I was seated in the audience; it made an impression.

Now I think it’s becoming apparent that cars are indeed going electric. Over time, we’ll see more electrified vehicles of all types, and while the internal combustion engine will continue, its role as the preferred means of motive power will diminish. I can actually see a day when gasoline and diesel engined vehicles will no longer be permitted on certain roads, although I agree that’s a long way off.

And I do understand that there are still many issues with electric vehicles (EVs, as they are known), like the “cleanliness” of the electricity used to power them, the need for a sufficient charging infrastructure (both at grid and charge station level), the length of time it takes to recharge, the high price, limited range, consumer resistance, etc., etc..

No, it’s not a done-deal by any means, but vehicle electrification certainly represents a corner being turned.

Which brings me back to the Volt. Unlike what some refer to as “pure” EVs like the Tesla, Nissan Leaf or Chevrolet Bolt (combining a battery that you plug in to charge, and an electric motor or motors to drive the wheels), the Volt is also fitted with gasoline engine that acts as a generator to sufficiently supply the battery once its charge is depleted (it won’t fully recharge it, but it will maintain a base operating level).

General Motors calls the Volt’s gasoline engine a “range extender” and the entire propulsion system is branded “Voltec.” The key thing, though, is that the engine typically doesn’t drive the wheels. What it does is charge the battery that powers the motor that drives the wheels, arguably enabling the Volt to be designated as an EV.

I know… clear as mud, and herein lies a problem with the Volt that GM has been remiss in solving. How to simply explain the technology! It sounds more complicated than it is. How about this? Think of it as a type of Plug-in Hybrid Electric Vehicle (PHEV). In practice, you can drive the car locally in pure EV mode; and for longer trips you can drive the car all day in “extended range” mode. To fully recharge the battery, you plug it in. For most people, that’s about the sum of it. 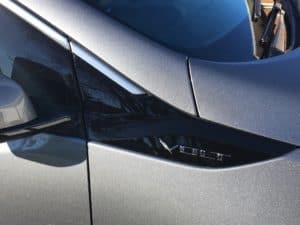 Volt’s electric vehicle designation, however, is hugely important for consumers, and here’s why: it makes the Volt eligible for a significant rebate offered as an incentive to buyers of electrified vehicles. In my province, Ontario, that rebate is a formidable $13,000 (although this is recent; previously it was $14,000 for the Volt).

Notwithstanding criticisms concerning the “purity” of the Volt’s EV credentials, that $13,000 is a big incentive to “go electric.” Certainly, I wouldn’t have bought an EV without it until the issues listed above are resolved. Perhaps because of this generousf incentive, the Volt’s 2017 sales in Canada are equivalent to 20% of US sales: twice the norm.

As I say, the advantage for the Volt driver is being able to use the vehicle almost exclusively on battery power when driving locally, and the practicality of range extension for longer trips. In my case, so far I’ve driven 2,400 km in two months of ownership, and filled the tank twice. The Volt requires regular grade fuel and the tank holds a paltry 33.7L, so you can see I’m not burning much gasoline.

Volt received a full makeover for the 2017 model, so it’s now referred to as the second generation. It arrives in two trim levels: LT at $38,995 and Premier at $43,095. Freight and taxes add another $2,000, but your government incentive will take a big chunk out of the price if you live in the right province!

I should add that I’ve installed what is called a Level 2 charging station in my driveway. Level 1 is normal 110-volt household current, which charges the Volt’s battery in 14 hours; Level 2 is a 240v outlet that requires 4.5 hours to charge the battery. Ontario offers a 50% rebate on the cost of the charger and its installation, and in my case, the Flo brand charger was $995 plus tax and installation cost $400 (Flo is a Canadian company establishing a country-wide charging network). While the Volt’s battery is rated at 18.4 kw/H, its usable capacity is 14.0 kw/H because it always keeps 25% charge in reserve. Consequently, charging from “empty” requires 14 kw/H, which, when billed at our average winter household rate of $0.126 per Kw/H including ancillary charges, costs $1.76.

My practice is to charge the car during the night, taking advantage of the lower cost “off-peak” electricity rates. The Volt can be programmed to only charge at off-peak times (here that includes weekends) if you choose.

So far, I’m very happy with the Chevrolet Volt, although the claimed 85km range in EV mode is proving elusive. In the -20 degree temperatures we’re experiencing this winter, 60km is more accurate. I assume it’s because the battery is less efficient in the cold, but it’s a big hit that diminishes the car’s “pure” EV usability. I’ll speak to this in the next article in this series. 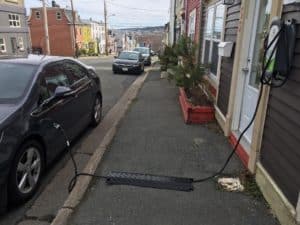 One more thing about I should mention about the Volt — and any plug-in or battery electric vehicle, for that matter — is the issue of where to charge. Happily the Volt is not totally hobbled when its battery is depleted as the range extender kicks in (again, a feature that highly recommends this type of vehicle). But for those on battery alone, the consequences of a dead battery are much more significant. I guess it goes without saying that even just plugging in such vehicles can be problematic if you don’t have ready access to a charge station. Those living in apartments, condominiums, downtown housing without a driveway really cannot feasibly buy an electric vehicle (although check the St. John’s picture). Even a vehicle like the Volt is arguably wasted if you can’t regularly recharge at home. It’s an issue that will bedevil the development of vehicle electrification (other than hybrids) for the foreseeable future. At this point, all EV owners are still “early adopters!”

The next article in this series will focus on the Volt’s everyday drivability, strengths and weaknesses, along with an update on fuel/electricity consumption. 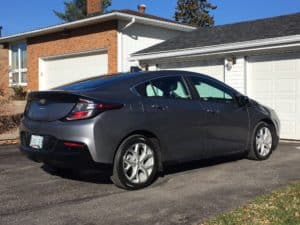