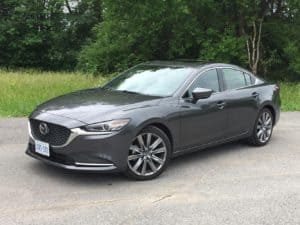 Back in 2008 I had the pleasure of attending the media launch of Mazda’s all-new 2009 Mazda6 in Los Angeles. I liked this midsize four-door sedan for several reasons, notably its price, design, power, handling, comfort and available equipment. So when I got home and a friend asked me to suggest a replacement for her aging Honda, I recommended it.

Well my friend still drives that car. She’s thought of updating it on occasion, but she’s been very happy with the car and hasn’t been sufficiently motivated. And she really likes the Mazda dealer, Hunt Club Mazda in Ottawa (she asked me to mention them…) from whom she has received friendly, courteous service over the years. That’s something many car buyers don’t consider – the dealership experience — but she certainly values that relationship.

When I received the new 2018 Mazda6 for a road test, I thought it would be interesting if my friend took it for a spin, and she agreed. It’s two generations on; would she like it more, less, or be indifferent? Fact is, she thought the last all-new Mazda6 didn’t seem that much different than her 2009 model Would this one? 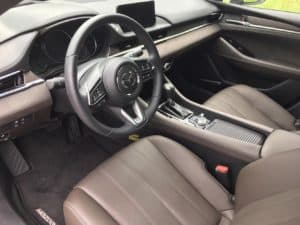 Before getting to her observations, a few notes on the latest model.

The 2018 Mazda6 starts at $27,000, and arrives with a refined chassis, all-new interior and SKYACTIV vehicle dynamics with G-Vectoring Control (not a gimmick, this award-winning technology provides more precise steering; greater ride comfort, increased stability). My test vehicle is an example of the new “Signature” version, which means it has all the options and bumps the price up to $38,800 plus $1,795 freight. It’s fitted with a four-cylinder turbocharged engine that makes 227 horsepower at 5,000 rpm and a lusty 310 pound-feet of torque at a low 2,000 rpm. The transmission is a six-speed automatic with sport mode and paddle shifters. Fuel economy is rated at 10.0/7.5 L/100km city/highway (this compares to 12.0/8.0 L/100km from my friend’s V6-powered car). Regular grade fuel is recommended.

However, it’s got to be said that as a four-door sedan, the Mazda6 is in something of a declining category, with many buyers now opting for smaller cars or compact SUVs. Nonetheless, this type of vehicle has many attributes. Comfortable, practical, roomy, arguably safer than compacts and subcompacts due to their mass; they can be powerful, sporty, often very well equipped, fuel-efficient even… there’s a lot to recommend a midsize sedan. And the 2018 Mazda6 received a five-star overall rating from the US National Highway Traffic Safety Administration. 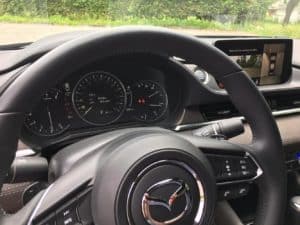 The Mazda6 Signature model is what I would describe as a top-of-the-line mainstream vehicle. For not a lot more you could choose an entry-level luxury vehicle, but it would be the base model. With the Mazda6 Signature you get pretty much everything but brand exclusivity. That said, arguably the Mazda brand has plenty of resonance itself, being something of an alternative choice among mainstream contenders.

I think it’s fair to say my friend was immediately impressed with the appearance of the 2018 Mazda6, running her hand over the fender, examining the details of the grille, commenting on the apparently high level of design and build quality. 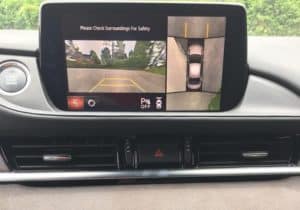 Starting the car, and backing out of her driveway, she noted the quiet operation of the engine and commented on the usefulness of the surround view and rear cross-traffic alert.

“That’s something I need backing out of this driveway; you can’t see a thing!”

Driving along city streets, my friend settled in. “Feels nice; I could get used to this. It’s definitely smoother, quieter than mine.”

It was indeed quiet; although my experience is that the engine will deliver an agreeable, muted growl under harder acceleration (believe me, this car will get up and go). With a light foot, though, the cabin is virtually silent and the engine/transmission barely audible.

“This car feels light to the touch; easy to drive. I like the way it handles and the sporty look; it’s not dowdy. The choice of colours is good, too, and I like this dark brown interior,” said my friend.

“Is the seat a bit narrower?” she asked. “Maybe it’s nine years of sitting in mine, but this one feels firmer. I’m comfortable though.”

The seven-inch display located at the top of the dashboard was something that concerned her from the beginning. She thought it might obstruct her outward vision, but found it was no problem. Regarding the head-up display, of which she was also initially skeptical:

“I love it! The information’s there when you want it; otherwise you don’t notice it at all. Great feature.” 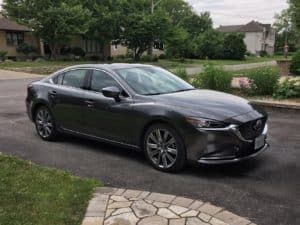 My friend’s no slouch when it comes to the latest technology. An Apple user, she’s quite comfortable with personal devices, but Mazda’s “Connect” Infotainment System gave her some pause. A combination of display and centre-console mounted rotary knob with ancillary buttons, I think it’s one of the best Human Machine Interface (HMI) systems out there. She, however, will take some convincing, preferring touch-screen controls (which this system also allows).

“Maybe once you get used to it,” she reflected.

Apple CarPlay and Android Auto are not supported, I should mention, although they will be in future models starting with the 2019 CX-5 available later this year. And importantly for those who want this functionality, CarPlay and Auto can be retrofitted to all existing models equipped with Mazda Connect starting this fall (an upgraded USB port is required, at a charge to be determined).

Voice activation is also an option as is a choice of familiar knobs, buttons and switches. Cars these days have redundant systems from which you can mix and match based on your preference. Drivers do need to spend some time with all the features now available, however, as driving is no longer just about “zoom-zoom.”

And speaking of that, no, there’s no zoom-zoom script to welcome the 2018 Mazda6 owner. Maybe that marketing slogan is being downplayed over the years, although the company still publishes its Zoom-Zoom magazine. Fortunately, I think the distinctively sporty and youthful character of Mazda vehicles continues. That really is their brand identification and I believe it does set Mazda apart from the competition. That said, my friend didn’t even notice the paddle shifters. In this type of vehicle, who does, really?

Bottom line? Parking the car after driving on a combination of city/highway driving, she was clearly impressed. 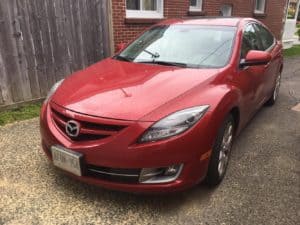 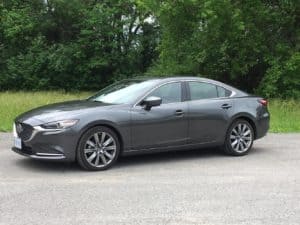