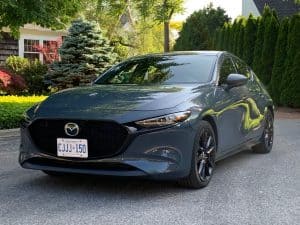 Spent an entertaining week in the 2019 Mazda3 Sport GT AWD. It’s the first model of the fourth-generation Mazda3, and it features a new platform along with new interior and exterior styling, and improvements to driving dynamics and convenience features. Except for the 2.5L four-cylinder engine, it’s all-new, in other words.

Also news is that for the first time on a Mazda3, all-wheel drive is available, although a little digging turns up limited 4WD versions of its predecessors the 323 and Protégé.

But that was in a previous century, and with the paucity of AWD mainstream compact sedans and hatchbacks on the market (only Subaru Impreza and the newly released Toyota Corolla/Prius come to mind), this really is an important development. 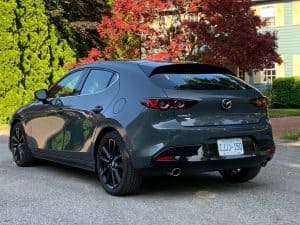 The Mazda3 “Sport” is Mazda’s term for the hatchback, as opposed to sedan. If you’re familiar with the outgoing Mazda3 you can readily see the difference in design and character. It looks longer (it’s actually a tiny bit shorter), and lower (it is, a little). But it is narrower by 25 millimeters (one inch).

It’s got attitude, don’t you think? Hunkered down; looks like it means business, especially with those black metallic 18-inch wheels, part of the $2,500 Premium Package. Mazda says the car is designed to suggest speed and aggression. Grrr.

Outside, the new front and rear LED light treatment emphasize the car’s sleek profile (those are adaptive and self-levelling headlights, by the way, on this model). Inside, red leather greets, which I guess isn’t such a surprise as other manufacturers are also feeling the love for red interiors these days. Don’t worry, it’s not a bright red, it is an option and I think it looks classy. What’s even better is that the redesigned front seats (power adjustable with memory for the driver) are very comfortable and supportive, with nice side bolstering to keep you in place. You kind of sit in these seats, rather than on them. 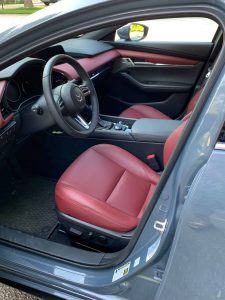 The audio system is also re-engineered, comes with eight speakers and 12 with the Premium system. The quiet interior allows it to shine.

The historically excellent Mazda Connect driver interface is updated by tweaking the centre-console mounted controls, and I notice the drink holders have been moved from behind the controller to a space in front of it. This is good; keeps elbows of the driver and front-seat passenger from sitting on their drinks, and gives better access to the interface controls. A bigger display, too, that doesn’t seem as tall as the outgoing version.

Under the hood is the aforementioned 2.5L four-cylinder engine making 186 horsepower at 6,000 rpm and 186 pound-feet of torque at 4,000 rpm. It’s a six-speed automatic transmission (a manual is not available with AWD) and there’s a “Sport” mode you can select via a switch on the centre console.

All manner of desirable electronic safety aids are present, including radar cruise control with automatic braking, blind spot monitors, lane change warning and management, head-up display and rear cross-traffic alert. These all worked very well. The front airbags are bigger and knee airbags for driver and front passenger have been added.

Additionally, this car arrives with Mazda’s G-Vectoring Control Plus, which is not just a gimmicky name and does work to keep the car balanced in corners and when driving on uneven pavement. According to Mazda, drivers will feel less need to make minor steering corrections and will experience a greater level of control and stability on the road. 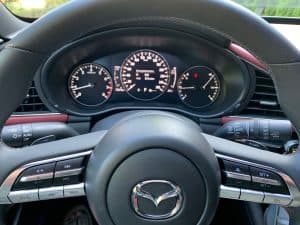 I had occasion to drive the 2019 Mazda3 Sport AWD about 1,000 km in the city and on the highway. On an extended trip away from home the vehicle was laden with two adults, luggage and a child seat. With a three-year old occupying the seat along with all of his gear, the Mazda3 was pretty much at capacity, its cargo room behind the rear seat quickly filled.

I must say my partner and I felt that the interior was small, even when it wasn’t loaded. Got that feeling right away in this car. The black headliner and side pillars don’t help, nor does the large center console. Front headroom is reduced in comparison to the outgoing model and we felt somewhat confined. From the outside, the car looks like it should be roomier.

Nonetheless, it is still a compact car and the Mazda3 Sport GT AWD is a pleasure on the highway; it feels solid and relaxing to drive. The cabin is notably quiet, with the engine and transmission typically unnoticeable in operation. I liked the speed limit display embedded in the instrument cluster and the corresponding redline that appears on the electronic speedometer display. The car feels stable in crosswinds and on bumpy pavement. Outward visibility, though, is not great; the blind-spot monitors in the mirrors and head-up display are helpful, therefore. 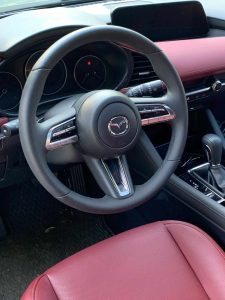 The latest Mazda Connect system presented a long learning curve for me. Frankly, I liked the previous generation’s controls and found them easier to manage. The larger 8.8-inch display was appreciated, however; the navigation system’s mapping is superior to some others I’ve experienced, but operation of climate, audio and vehicle settings on the move was multi-stepped. It’s not a touch-screen display, and many actions are not permitted when the vehicle is in motion. While the Mazda3 supports Apple CarPlay, I was never able to get audio navigation directions from my XR or through the car’s audio system using CarPlay or Bluetooth (I use both systems without issue in my personal car).

And I’d like to propose a modification that would permit identification of the flat, uniform Mazda Connect console mounted buttons by touch. The idea is that you don’t have to look at it, right? But the buttons for different functions are the same and it’s distracting trying to quickly find the right one.

Likewise on the steering wheel. The audio, information and cruise controls look neat and tidy, but they’re small and fiddly, and likewise, you can’t readily identify them by touch (or by sight, come to think of it).

Driving in the city was something of a different experience. Here the poor outward visibility is more frequently a challenge. The Mazda3 Sport’s small rear window seems letterbox sized in the rear-view mirror, so that’s not much help (thank goodness for the rearview camera when parking), and the B and C pillars are large, almost eliminating  side and rear vision.

In city driving I found the engine can be noisy, even buzzy on occasion. And it’s also not particularly tractable, lurching a bit here and there as the transmission presumably makes up its mind between power and fuel economy. In these situations the car can feel sluggish and unresponsive. Sport mode is an option, I suppose, but that can give you more urge than required. I guess you get used to it, but it seems that Mazda has arguably put a lot of work into sporty, responsive handling to the detriment of predictable and smooth throttle response in everyday stop-and-go urban driving. Is the AWD a factor in this? I’ll see when I get to drive the FWD model. 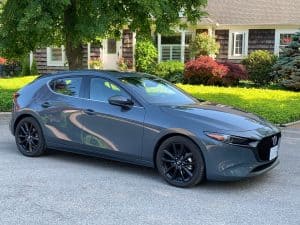 Another nit to pick is the automatic locking feature to which the Mazda3 defaults. I get the idea… you can walk away without having to press the remote’s button to lock the car. Instead, the car locks itself when you’re a couple of meters away. Problem is, if you’re going back and forth loading or unloading the car you invariably arrive to a locked car. I do know Mazda owners who have disabled this feature in their car, as we did in this one.

One more thing, you can order a Mazda3 Sport GS AWD, as opposed to the GT version. Fewer hi-tech features, but it’ll save you a few thousand dollars at $28,826, including freight/pdi. 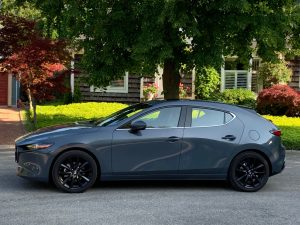