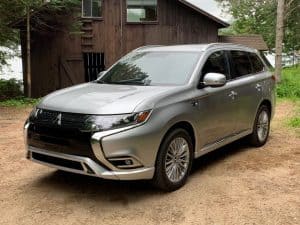 Released in Canada in 2017 as a 2018 model, the Mitsubishi Outlander PHEV (Plug-in Hybrid Electric Vehicle) quickly became Canada’s best-selling plug-in hybrid. That shouldn’t be too surprising because there wasn’t a mainstream mid-size SUV plug-in hybrid on the market until Mitsubishi released the Outlander PHEV.

And guess what? Canadians love their compact and mid-size SUVs, especially fuel-efficient ones! Additionally, Mitsubishi supplies an industry-leading 10 year/160,000 kilometer powertrain and battery warranty along with its five-year comprehensive warranty.

However, we’re actually late to the Outlander PHEV. It’s been available in other markets for several years and the company has sold 200,000 of them worldwide. Look at it this way: they have some experience with the model, which is good for the consumer. 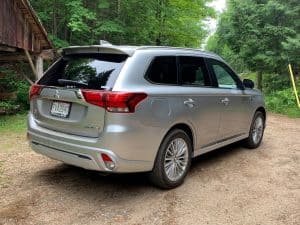 I know… a bit pricey for the mainstream midsize SUV segment, but while hybrids have somewhat moderated in price, electric and plug-in electric vehicles are still premium, limited run products. As government incentives are reduced, and popularity of electric vehicles increases, expect manufacturers to lower the MSRP. In the meantime, at the time of this writing, buyers are eligible for at least a federal government PHEV purchasing incentive of $2,500.

And maybe a snappy green licence plate, too!

For 2019, you have a detail evolution of the 2018 model that includes an updated front and rear fascia, a rear spoiler, new 18-inch alloy wheel design, new design LED headlamps including LED high beams for SE Touring and GT models and new fog lamp design. 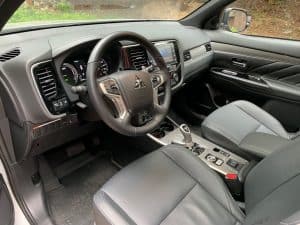 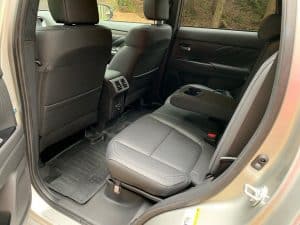 What’s not available, should you be interested in such features, are a wi-fi hotspot, panorama sunroof, ventilated seats, self-parking, low-range 4WD, hill descent control and head-up display.

Outlander PHEV on the road 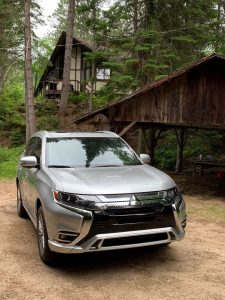 On the road – city and highway — I was impressed with Outlander’s quiet and steady ride. Its drivetrain, including the one-speed “continuously variable” transmission, was typically almost silent in operation, and power was always sufficient in my experience (there is up to 277 horsepower available from the combined engine and motors). The brake pedal often seemed too sensitive to me, however, often resulting in a more abrupt response than expected.

A “Brake” gear can be selected to increase battery recharging through engine braking and I can tell you that many PHEV and EV drivers use this gear in their vehicles exclusively. That said, in the Outlander PHEV this gear didn’t seem to offer the aggressive regeneration  I’ve experienced in other PHEVs.

The paddle shifters I found unnecessary, but I never use these unless they’re in a PDK Porsche! There is also a “charge” mode that can recharge the battery on the road (which is an interesting innovation, but will arguably increase fuel consumption), and a “save” mode that permits saving your battery power for later. More on these features below.

I also drove on rugged forest trails featuring steep, inclines and rocky, uneven surfaces while staying at a cottage in rural Quebec. First of all, I can attest that an Outlander will easily swallow a large amount of cargo and secondly, Outlander PHEV’s 185 millimeter ground clearance and confident traction were noted (although a Subaru Outback will give you 220 mm ground clearance if that’s important to you!).

Interior headroom and legroom for front and rear occupants is generous, and the rear seats cleverly fold flat to maximize cargo capacity when required. Really, it can be cavernous back there. Outward visibility is good to the front and also, surprisingly, to the rear. Outlander’s big rear window and large outside rear-view mirrors were appreciated.

The knobs, buttons and switches 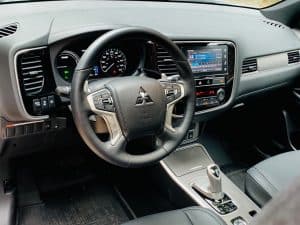 The Outlander HMI (Human Machine Interface) is somewhat old-school, featuring a smallish touch-screen display that I found fussy (annoying, actually) to work with. Too touch sensitive by far. Some dash-mounted controls are obscured by the steering wheel and hard to find by touch. Centre console storage capacity (for phones, small items) is nonexistent, although you could press the drink holders into service if they’re not being used. The instruments are large and easy to read, although I didn’t find a digital speedometer to complement the analogue gauge.

The redesigned seats are comfortable and multi-adjustable although lacking lumbar adjustment. They worked well enough for me and my passenger, though.

So… Outlander PHEV is a fine-looking conveyance (if a little overdone with the front-end chrome). It’s well equipped and competitively fuel efficient for a vehicle its size, and it offers, I would suggest, all the available features that most people would want in a mainstream mid-size SUV.

Why buy a PHEV? 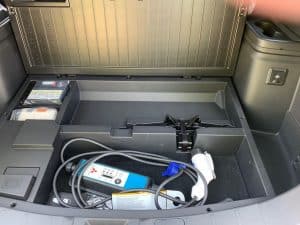 But why buy a PHEV in the first place? There’s a question! I guess it depends on the buyer, but my reason (and yours may be quite different!) would be to drive exclusively on battery in the city (or as close as possible to that), while using a conventional hybrid gasoline/electric mode on longer highway trips. The best of both worlds, in other words.

Here the Outlander PHEV is wanting. Electric vehicle range is, I think, generously estimated at 35 km, although I only managed 26 km (a capacity percentage to accompany the instrument panel’s battery graphic would be helpful). And you should know that you can expect about 40% fewer kilometers in EV mode in the winter.

What can you realistically do with 21-35 km electric range? Well, I guess it depends on your circumstances. The average Canadian commute times are getting longer, and when driving locally, an EV range of 35 km – even if you can achieve this — comes goes pretty quickly. It’s not enough for a typical day’s local driving in my experience (air conditioning, heating also takes a big bite).

The Outlander PHEV is fitted with a 12.0 kWh battery that takes up to 13 hours to charge on a household 120v outlet, 3.5 hours to charge on a Level 2 charger, and 25 minutes to 80% capacity via its CHAdeMO fast-charge port (I don’t know why you’d ever bother). But as I say, however you charge it, the battery range is not sufficient for driving a useful distance on EV only, in my opinion.

Furthermore, Outlander PHEV’s combined fuel consumption (9.2 L/100km) is about the same as the four-cylinder Mitsubishi Outlander that you can buy for many thousands less (9.1 L/100km from the $31,698 ES AWC Touring), and with its smallish 43L tank, the Outlander PHEV’s overall range of 499 km is, shall we say, modest.

The “charge” and “save” modes referred to above are also somewhat problematic. Go to the Outlander PHEV forum (myoutlanderphev.com) for a long debate on this subject. The general assessment of their actual effectiveness is unresolved. 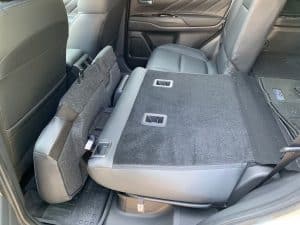 However, looking at it another way – and this is perfectly reasonable, I think — if you regard the Outlander PHEV as a hybrid vehicle with occasional EV mobility, it gives you competitive overall fuel economy for a midsize SUV, a killer warranty and a rebate of $6,500 should you live in Quebec and $5,000 in British Columbia (everybody else gets $2,500).

Combined city/highway fuel consumption of 9.2 L/100 km is nothing sneeze at in this class of vehicle, and I reckon I could better these numbers using eco-conscious driving techniques. Put a little trailer behind it and I reckon you’d still be happy.

Additionally, you get the functionality of a midsize SUV that’s been on the market for a few years with running improvements year over year.

The Mitsubishi Outlander PHEV is a fine introduction to greener automotive technology. But there’s more that can be done and Mitsubishi would do well to seriously invest in this vehicle as competition in this segment is surely on the way.

For current offers and pricing, go to Mitsubishi Canada

What is a Plug-in Hybrid Vehicle?

The key difference between a PHEV an a “conventional” hybrid vehicle is that its battery is large enough to exclusively power the vehicle for a useful distance. The battery in my Chevrolet Volt, for instance, can exclusively power the car for 105 km in certain conditions. The PHEV’s battery can be partially or fully recharged by the vehicle’s engine/generator, or by plugging into a suitable outlet at home or at a commercial charging station. On the road, PHEV emissions will be lower than an exclusively fossil-fueled vehicle. In EV mode, it will be a zero-emissions vehicle. 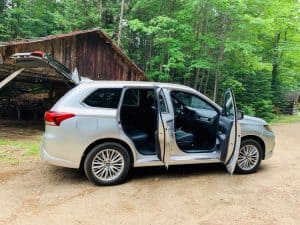 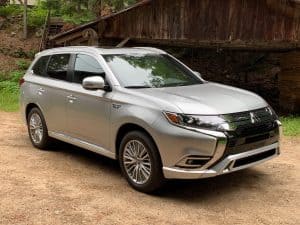 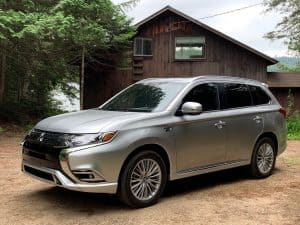 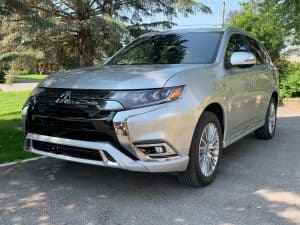 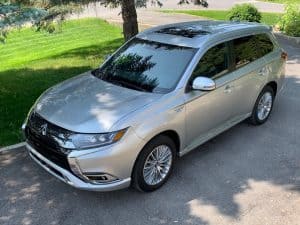