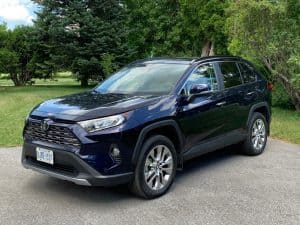 All-new for 2019, the Toyota RAV4 may be nothing like your mental image of this vehicle. It’s bigger, tougher-looking, ready for adventure. Nothing like the little cute-ute that debuted so long ago.

But just like people, vehicles evolve, change, grow up (we hope) as the years pass. This is the fifth generation “RAV,” adapting to its times.

Riding on the latest Global Architecture platform, the 2019 RAV4 is completely redesigned both outside and in. The exterior, as I say, leans toward a rugged, more adventurous look. It starts with the angrier new grille and purposeful front lighting. The expression suggests foe rather than friend.

Then you’ve got the angular, cladded, extreme off-road-style wheelwells permitting big travel and a very impressive 218 millimeter ground clearance. Doesn’t have a low range gearbox, but it implies one.

“Move over, folks! Coming through!” is the message. “Outta my way!” 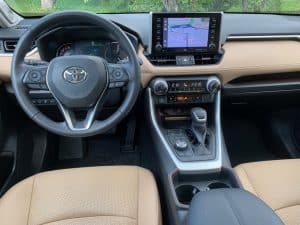 But being a Toyota it has a more protective side, as standard on all 2019 RAV4s is Toyota Safety Sense 2.0.  This includes a pre-collision system with pedestrian and bicycle detection, radar cruise control, lane departure alert with steering assist and road edge detection. Useful features, these, often extra cost on other vehicles. Oh, and Apple CarPlay, too, but not Android Auto. 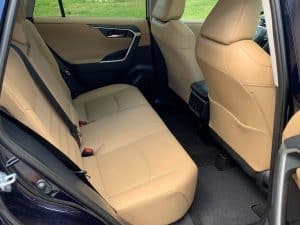 The interior is indeed very swank. Ours was contrasting beige and black with tasteful matte silver accents, but it was quite a climb to get into the seat. You do feel as if you’re in a midsize SUV in the new RAV4 and I’d suggest that a few years ago you would have been. It’s roomy, there’s no doubt. There are numerous storage areas in the doors, the centre console, the dash. The cargo area behind the second row seats is large; and with the second row folded it’s pretty much huge. That cargo floor, by the way, is low, permitting easy loading once the power liftgate is opened.

Instruments are easy to identify and read and for the most part, you can use old-school knobs and switches to make it all go. Upholstery in the Limited is “Toyota Softex,” which is a synthetic leather. Look at it this way: it’s just like leather except it’s more durable and doesn’t come from a cow. If you want “real” leather… well, not in a RAV4. 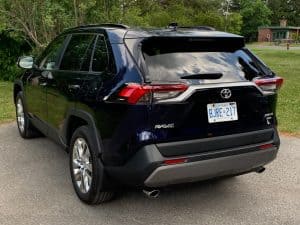 Start it up, move the stubby gearshift to Drive and you’re on your way. It’s an eight-speed transmission mated to a new 2.5L four-cylinder engine. Happily, power is up over the outgoing model to 203 horsepower and fuel consumption is down. But the engine sound can be harsh, especially at low speeds, and the transmission undecided (while it’s making up its mind, you either lurch forward or lug). RAV4 also makes some peculiar  noises as the all-wheel drive deactivation system does its thing, and the steering, I have to say, is not exactly quick. It’s cooperative, but I wouldn’t call this a sporty chassis.

Tows, though. Fifteen-hundred pounds in all specifications but  the Trail version which manages 3,500. Trailer sway control is standard.

In addition to the sometimes coarse engine, RAV4 lurches a little when it encounters uneven pavement. Kind of shakes occupants around a bit until it recovers its gait like a body-on-frame SUV of yore. On smoother surfaces it’s quite serene, however. 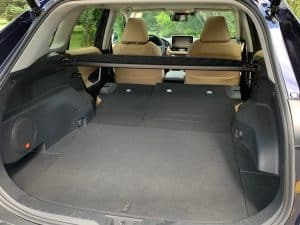 But here’s where it “had us at hello.” Partner and I are out on a bike ride; partner gets a flat that we’re not equipped to fix. It’s hot; really hot. I cycle home to pick up the RAV4, return to overheated partner and we slide that bike into the vehicle no problem. Tons of room, as I mentioned. Could have fit two bikes!

Then she encounters the ventilated seat. If I was a Toyota salesman, I could have sold that RAV4 right there!

Killer interior, Toyota, and a generally pleasant experience on the road. Numerous desirable safety features and excellent fuel economy at 9.2/7.1/8.2 L/100km city/highway/combined (regular grade fuel, too). Lots of room and a smorgasbord of luxury-oriented features combined with off-road and long-distance travel aspirations. Given the latter, the option of a 3,500lb towing capacity in this class of vehicle is appreciated (the long-gone V6 RAV4 is still sought after because of this capability).

And in case you didn’t know, Made in Canada! 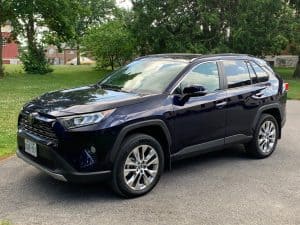 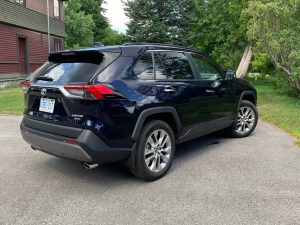 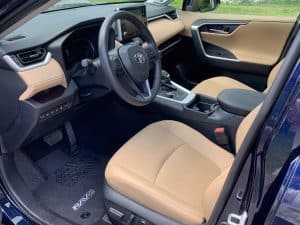 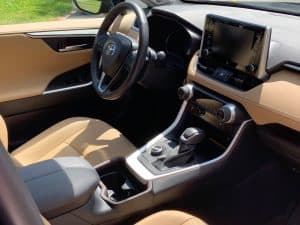 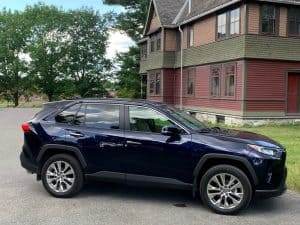