2014 Mitsubishi Mirage – You can do better

Beam me up, Subie! XV Crosstrek gets hybridized 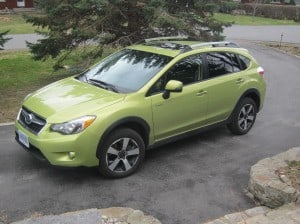 So, are you Crosstrekker or Crosstrekkie? The thought occurred to me one morning in as I was boldly going. True, the 2014 Subaru XV Crosstrek does not possess warp drive, which would have come in handy while stuck in traffic. But it’s now available with hybrid drive, which could also be useful.

Actually, the 2014 Subaru XV Crosstrek Hybrid is a vehicle I’ve wanted to experience since its debut in 2013, especially after having driven the non-hybrid version and finding it to be a clever use of the new Subaru Impreza platform. 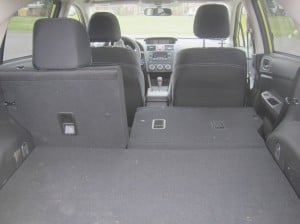 The Crosstrek is a practical car that offers more cargo capacity (1,422 litres) and presumably more off-road prowess (because of its elevated road clearance) than the Impreza. Indeed, ride height is a lofty 220 millimeters (same as the Subaru Forester), which is only five mm less than a serious off-roader like the Jeep Wrangler. Even if your typical drive is on asphalt, I guarantee you’ll like the ride height and standard all-wheel drive in the snowy winter months.

The conventionally-powered XV Crosstrek features the same drivetrain as the Impreza, and here it’s a bit wanting in non-hybrid form as the XV Crosstrek is heavier than the Impreza. Peppy off the line, but runs out of steam quickly. Likewise, fuel economy from the latest 148-horsepower, 145 pound-feet torque flat four-cylinder — never a strong suit of Subaru’s signature horizontally opposed engines — is good on paper, but not so good on the road.

The hybrid version should change all that, and indeed the extra 13 hp and 48 lb-ft of torque does seem to give it a little more snap when accelerating from standstill. 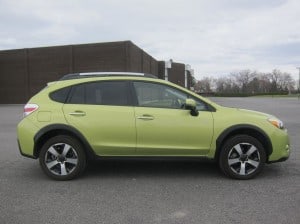 I like the look of the XV Crosstrek Hybrid, especially wearing its distinctive Plasma Green paint and special 17-inch alloy wheels (which are so much nicer than the standard XV Crosstrek’s ugly rims).

Because of the ride height, ingress and egress are easily accomplished. Just open the door, point your posterior at the seat, and you’re there. The instrument panel is easy to read and use, controls are simple, lights are automatic, and at $29,995, this top-of-the-line hybrid version is well-equipped. Automatic climate control, keyless remote and start, sport gauges with blue luminescent lighting, side turn signal repeaters, information display, silver roof rails, you get a lot.

But not everything…. Where on earth, for instance, is the navigation system? And the satellite radio? Not available on the hybrid model. To get those items you must buy the less expensive ($28,995) XV Crosstrek Limited. Seems bizarre to me! We’re Crosstrekking, after all. We need to navigate, Captain! 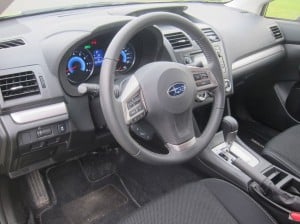 But I liked the way the XV Crosstrek Hybrid handled and cruised quietly along the highway. Really, I had no issue with the CVT except that it can make the engine sound noisier under acceleration. Use a light right foot, and it doesn’t intrude. The elevated ride height gives you a good view of the road ahead, and the rear view camera (although small) was some help when reversing. Seats were comfortable and heated.

But the hybrid system is not very sophisticated. It doesn’t run on battery alone (EV, or electric vehicle mode) like a Prius, for example. Well, maybe it will for a few seconds, but effectively this is a hybrid system where the electric motor and gasoline engine work in tandem; the engine using stop/start technology at intersections to save fuel (works fine). 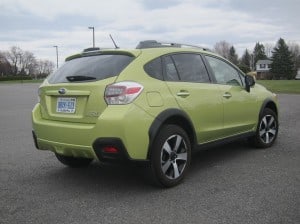 That said, what they hybrid system doesn’t do is give you are very good fuel consumption numbers. The best I got in city driving was 9.2 L/100km, which is a little better than you’ll see from most compact SUVs, but not by much. The official 2014 ratings expect 6.9/6.0 L/100km, city/highway, but I got nothing like that. In fact, the standard XV Crosstrek is supposed to return 8.2/6.0 L/100km, city/highway, so on that basis – as much as I’m typically a fan of hybrids — I’d suggest saving $1,000 and buying a Limited version with leather upholstery, dual-zone climate control, satellite radio and navigation standard.

You can use the saved money to buy some nicer wheels for it.

And for the record, I’m believe I’m a Crosstrekker.