I must admit that I have a soft spot for the Studebaker Avanti. Do you know this car? It’s kind of a strange one. As the years go by, I’m not sure that the design is holding up very well, although it was controversial right from its introduction in 1962 as a 1963 model. But when I first saw one as a child, I was smitten and I remain, you know, interested. 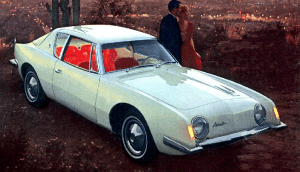 As far as the car’s legacy goes, maybe it was a case of “too much, too late.” The famous Raymond Loewy design studio was commissioned by Studebaker to come up with the Avanti in literally a matter of weeks. Loewy’s brief – and how’s this for pressure – was to present Studebaker with such an impressive car that it would save the free-falling company from financial ruin. So the studio really went to town with this assignment.

Surely people would be blown away by a futuristic coupe with a grille-less front end, aviation-style cockpit, disc brakes, sporty two-plus-two seating and ellipsis-shaped wheel-openings that actually described the orbit of a satellite (Sputnik wheel openings, Loewy called them).

Well… actually no. At the time, I’m not sure that consumers knew exactly what to make of the car, other than that it sure was “out there.” Most auto journalists, of course, thought it was the bee’s knees.

After the Avanti unfortunately but unsurprisingly failed to save its parent company, it was the car’s lead-designer, Tom Kellogg, the youngest member of Loewy’s three-person design team and a graduate of the Art College Center of Design in California, who maintained an ongoing connection to the distinctive coupe. It turned out that this was a vehicle that fans would not let die, and the Avanti had several resurrections over a period of decades – some designed by Mr. Kellogg or with his input – following the model’s official demise in 1964.

“I’ve concluded that the car is cosmic,” Kellogg told the Associated Press in 2000. “It has some sort of personality or spirit that keeps finding people to take it over and stroke it and keep it going.” It’s true: maybe it’s the flawed beauty; the tragic demise, the promise of resurrection, but the car’s got devotees; followers; believers yet. The definitive book is called “Avanti” by Thomas E. Bonsall. It’s a great read and reference (as is Mr. Bonsall’s history of Studebaker, “More than they promised,” published in 2000). 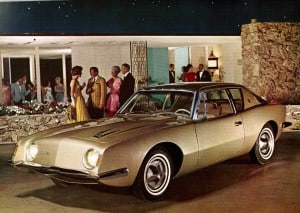 Mr. Kellogg himself, a reported fan of Acura, Mercedes-Benz and Porsche, owned an Avanti but eventually sold it. Maybe it’s still around.

Among other items, I collected Avanti memorabilia on-and-off for years, which in my case is usually a prelude to actually buying whatever object of interest is motivating me. But for some reason I’ve never pulled the trigger on the Avanti. Maybe for me this is a car that’s better to want than to own. 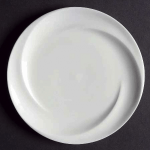 But as I say, I collect things, and at one point I became interested in a funky set of Wedgwood dishes I saw back in the mid-1980s. Wedgwood, as you may know, is a brand of fine English china that dates back to the 18th Century. Every once in a while they stepped out (Fairlyand Lustre, for example) but typically they made fussy, ornate, “olde-fashioned: ware. However, in 1984 Wedgewood hired an American firm, Gould and Associates, to create the radical “Shape 225,” which was, like the Avanti for Studebaker, to be a design departure for Wedgewood. Something modern; something futuristic!

The sleek, modern tableware would celebrate the company’s 225th year of continuous operation, and in retrospect, surely was an attempt to maintain appeal and generate attention two centuries on. I liked it when I first encountered it while looking for some pots and pans in an Eatons department store (Canadians may remember those fondly). Looked kind of space-agey. Simple and elegant; timeless, I thought. I didn’t buy any (couldn’t afford them, bought Corelle instead…) and like many collectors, decided I wanted to have a set now that they were no longer available.

During my search, I was reading up on Wedgwood’s Shape 225 pattern (there were several versions; Solar was plain white bone china), and who do you think was its American designer? Yes, the very Tom Kellogg of Avanti fame designed Shape 225. He was at the time Vice President of Gould and Associates, the firm commissioned by Wedgwood. It would have been a couple of decades after the Avanti, and I guess I like the guy’s work as the connection between the Studebaker Avanti and Wedgwood Shape 225 turns out to be the designer. 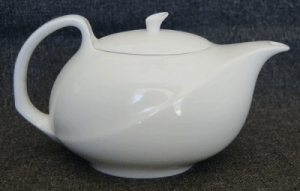 Of course, that discovery begged the question: what else did Mr. Kellogg (who’s sadly now deceased, by the way, since 2003) have a hand in?

Porsches, apparently, and Rolls Royce, although I haven’t learned the specifics of these assignments; and the interior design of the DC-10 aircraft for McDonnell Douglas (it would have been poetic if it was the DC-8, as that’s how my parents brought us to Canada when we emigrated from the UK). But there is another transportation-oriented assignment for which Mr. Kellogg is most famous among a very ardent group of enthusiasts; namely Star Trek fans. And as Star Trek fan myself, I think this is just hilarious. Tom Kellogg designed the Galileo — the original Star Trek Shuttlecraft — or at least, he had a major hand in it. 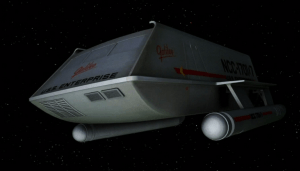 Now take another look at the Galileo and the Avanti, and maybe you can see a resemblance between the front of the Galileo (which postdates the Avanti) and the famous Studebaker. Put wheels on it rather than nacelles, and some fancy wheel-openings, and, you know, you can kind of see it… True, Galileo is not beautiful, not even sleek, but in the annals of Star Trek, it sure is iconic.

So there you have it. The Avanti, Wedgwood Shape 225 and Star Trek: three things I’ve appreciated for much of my life, all bearing the handiwork of one man. Honestly, what a coincidence. Or maybe it makes perfect sense..

Surely I would have liked Tom Kellogg, who by all accounts was an affable guy, respected by peers and clients alike. Apparently it was common for him to cast a professional eye on his surroundings, and even when laying in his hospital bed a few days before passing away, he is said to have looked around and observed approvingly, “This is a well-designed room.”

But according to his daughter Kris Machado, “The only hobby he really had was looking at cars.” I can relate to that.