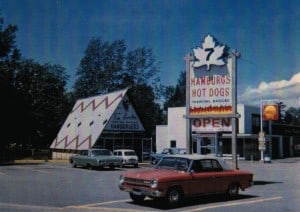 Here’s a picture I found at a local flea market. It’s an early Tim Horton establishment that apparently was located in North Bay, Ontario.

For people who like cars (and hockey, I guess), it’s interesting to see an original Mini parked next to the big green Ford sedan. What’s that? A Galaxie 500? 1962? And there’s a 1964 Chevrolet and a 1964 Rambler American Convertible.

The big “7” on the restaurant sign refers to Tim Horton’s Toronto Maple Leafs team number (a rather bold use of another company’s branding, I should think. Wonder if he asked for permission!).

Look above the front door and there’s an image of Tim guarding the blue line, the now-distinctive signature headlining his famous… Hamburgers?

Yes indeed, and hotdogs, too. But not a donut in sight, so what’s that all about?

If you take a look at timhortons.com’s history section, you’ll learn that the company was formed in Hamilton, Ontario in 1964, and that “The first Tim Hortons restaurants offered only two products – coffee and donuts.” There’s no mention of hamburgers.

The official history also identifies 1967 as the year in which Tim Horton and Ron Joyce became full partners in the enterprise, although as you might expect, it’s a bit more complicated than that.

Many have heard of now-billionaire Ron Joyce (who continued to have a role in the company until his passing in February, 2019), while Tim Horton’s tragic 1974 death in a car crash (in his De Tomaso Pantera) is part of Canadian lore.

But Tim Horton Hamburgers predates the familiar “Tim’s” that we now know. Wikipedia echoes the corporate account that the familiar “Tim Horton” brand was founded in Hamilton in 1964, but it also mentions that at this time the partnership was actually between Tim Horton and one Jim Charade.

Steve Penfold’s “The Donut: A Canadian History” fills in some blanks. Mr. Charade – ex-Vachon salesperson and donut plant manager — had already opened a donut shop called Your Donuts on Lawrence Avenue in Scarborough, Ontario in 1962. He wanted to compete with the American-based Mister Donut and Dunkin’ Donut chains that were setting up shop, along with Canada’s Country Style Donuts.

The story goes that after meeting Tim Horton (who sold a car to him in his off-season role as car salesman), it occurred to Mr. Charade that adding “star power” to his enterprise could be good for sales. So it was that he and Tim Horton joined forces and “Your Donuts” was renamed “Tim Horton Donuts.” Puzzlingly, though, the partners subsequently got busy opening a chain of Tim Horton’s hamburger restaurants, rather than donut shops, in and around Toronto. The picture you see here is one of those; really more hamburger stand than restaurant.

But why hamburgers rather than donuts? One factor may have been that donuts represented only about 4.5 percent of the Canadian fast-food market at the time while hamburgers accounted for 29 percent. That might have been the business argument, but perhaps more importantly, it turned out that Tim Horton was much more enthusiastic about hamburgers than donuts.

So maybe that preference had to be appeased by Mr. Charade to secure Mr. Horton’s involvement. In any event, Tim Horton Hamburgers kind of took off (briefly), while Tim Horton Donuts was slower out of the gate.

The first Tim Horton Donut franchise eventually opened on Hamilton’s Ottawa Street in 1964 (which I guess is what timhortons.com refers to as the company’s founding year).

But it wasn’t until 1965 that Ron Joyce became involved, eventually taking over the Ottawa Street “Tim’s,” and partnering with Tim Horton in 1966 (according to some reports, and 1967 according to others). Ultimately it was Ron who spearheaded the company’s spectacular future growth.

But that was pretty much the end of the road for Jim Charade, more visionary than manager, who resigned from the company in 1966 seeing none of its success. He was rehired on a couple of occasions, however, before finally being let go when the company was acquired by US-based Wendy’s. Mr. Charade passed away in 2009.

As his son suggested in a Globe and Mail interview, Mr. Charade was like the “fifth Beatle,” although unlike drummer Pete Best, it seems he never really managed to adapt to his missed opportunity and the lack of recognition for his contribution. Indeed he was right after all. Donuts were the future.

Tim Hortons restaurants used to have an apostrophe – Tim Horton’s. That apparently didn’t satisfy Quebec language laws, so the apostrophe was dropped. There may still be some locations where signage was not replaced. So take a picture if you see a Tim Horton’s!

The Donut: A Canadian History, by Steve Penfold, University of Toronto Press, 2008