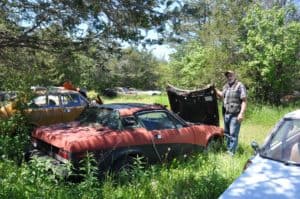 The story of Joe Lightfoot’s British car adventure goes back many years. It begins in the early 1960s with a teenaged Joe motoring around in the family’s diminutive Austin A30 sedan. This was a time when British cars like Austin, Morris, Vauxhall and Hillman were a common sight on Canadian roads, and while Joe also liked Studebakers, Packards and Flathead Fords, he developed a very soft spot for British imports.

As an adult Joe got busy building Lightfoot Antenna, his company that installed tower-mounted television antennas to rural customers mostly in Ontario’s Prince Edward County where he still lives. But he was always a car guy, and that meant he was a regular reader of the now-defunct Old Car Trader, published monthly by Auto Trader. Twelve times a year in the Old Car Trader you’d find all kinds of classic cars listed by province from Nova Scotia to British Columbia, so for $2.95 readers could embark on a monthly cross-country collector-car tour as they turned each issue’s nearly 300 pages. 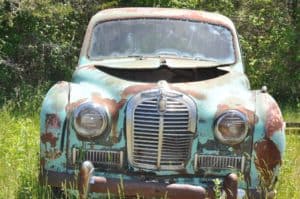 Joe was doing just that when he happened upon an Austin A30 for sale in St. John, New Brunswick, and that is how the adventure started.

Ahhh, the old family car. Nostalgia struck and Joe was powerless to ignore the A30’s charms. Sure, he wanted to see it, but this was the 1980s and very much pre-Internet, right? Back then, even the idea that a person in Ontario would, sight unseen, buy a car located in New Brunswick was pretty unusual. You’d have to be really motivated, which Joe found he really was. 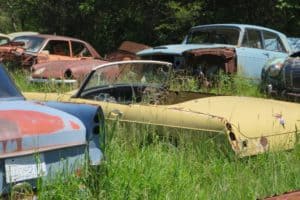 “Drive it away!” read the Austin’s encouraging advertisement. But prudently Joe set out with a buddy and a trailer attached to a 1983 Ford pickup. Driving 16 hours straight through, he was greeted by an A30 without a carburetor or spark plugs, so he couldn’t start it. But he was there now, and the car was indeed in awesome shape, according to Joe. So he bought it anyway.

After getting the A30 to Ontario, Joe realized that parts for it were not exactly plentiful anymore, and that he’d surely need some. The antenna business got him all over eastern Ontario and now that he was looking, he soon found a couple of A40s which he bought, and then came the flash of inspiration, the life-changing decision. He’d acquire an example of each Austin model exported to Canada. That would mean mostly family cars; models like the A30, A35, A40 Devon and Somerset, A40 Convertible, Cambridge, Westminster, Gipsy, Mini, Marina, 1100, 1800, and maybe a few variations like the Healey Sprite and America.

So now Joe was a man on a mission, and indeed some years later he’d pretty much achieved his goal, at one point owning 12 Austins, all drivers and licensed for the road. 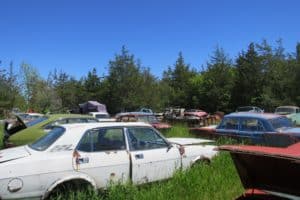 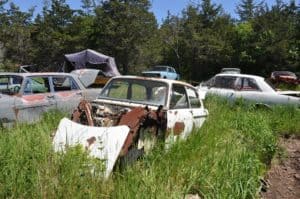 However, he also had a growing collection of unplated vehicles representing not only Austin, but also most of the other British marques that were exported to Canada. What happened was that while hunting for Austins, these other British cars presented themselves (or were presented to him) and Joe started picking them up as well. Eventually, he got proactive and placed advertisements in local publications. Penned by Joe, they read: “Wanted: old British cars in neglected or respected condition.” Unlike most people obsessed with cars (be careful what you wish for…), Joe actually had a place to put them on his acreage in “the County.”

His collection, therefore, continued to expand, becoming not only a historical record of British cars owned by the local population, but also of the British car industry in what was arguably its heyday. In the process, Joe Lightfoot became “Austin” Joe, known and liked by many, understood by a select few.

But this was Joe, not Jay, and most of the cars were very much of the neglected variety, which Joe dutifully “saved” by hauling them back to join the others on his property. He’d typically pick them up for maybe $125.00, which in case you were wondering, explains why no Austin Healeys were represented in his collection (big Healeys always had serious value, and weren’t neglected for long). 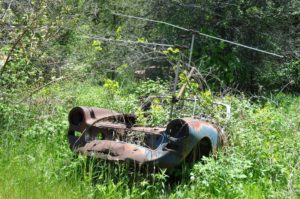 Still, what for Joe was a surely an enjoyable, if somewhat consuming pastime, for others was a bit mystifying. While it was truly fascinating for visitors to explore the collection, the experience could also be kind of sad. The vehicles were all stored outdoors and predictably succumbed to exposure as the years passed. Their deteriorating condition would add a note of poignancy to any visit.

After becoming the owner of a 1960 Morris Minor in the early 1990s, I first met Joe at one of the annual VARAC vintage race weekends then held at the track in Shannonville. He was also a regular at the annual Boot ‘n Bonnet British car show in Kingston every August. You’d often see him in his A30 (the Austin equivalent to the Minor), which was the very car he bought in New Brunswick. I remember asking what his plans were for the collection, which would grow to about 80 vehicles. He mused on the possibility of an Austin museum, which I, for one, would have been keen to visit. Joe may not have been serious about that, or maybe he was.

Certainly the vehicles were a fabulous source of parts, especially if you owned a popular MGB, Midget or even a Triumph TR3. But the majority of the vehicles were less interesting to the average enthusiast. They were family cars like the Hillman Super Minx, for instance, or the Vauxhall Viva or Austin Cambridge — vehicles that were all but forgotten, and now literally out to pasture. 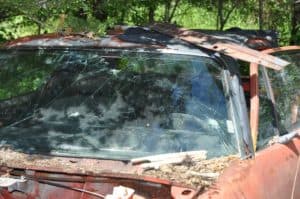 “Every car has a story,” says Joe as we tour what’s left of the collection (at the time of this writing, about 60 cars). He introduces each vehicle almost like an old friend. “See the dents in that TR7? The woman who owned it took a sledge hammer to it out of frustration,” he recalls. “It wouldn’t run and she’d had enough.”

“And that Morris J2 window van was actually the school bus in Shannonville for years. Those two A40s are the first cars I brought here, along with the Ford Prefect next to them, that was the third.” 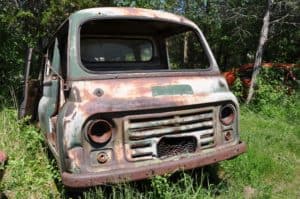 Joe can’t understand why there isn’t more interest in acquiring some of the parts. Pointing to a rusted Triumph TR7 coupe, he lifts the hood to reveal a Toyota 2R engine mated to a five-speed transmission. “For $200 you’d think someone would want that,” he says scratching his head. “A rear-drive five-speed, too. Pretty useful!”

Joe’s got several Austin Marinas that he sees as a great source of desirable parts. “They’ve got MGB engines, a Spitfire gearbox and a TR7 rear end,” he says of the last Austin model exported to Canada.

He identifies the remains of a Vauxhall Viva GT, its 2.0L engine capable of 120 mph, according to Joe, and then takes me to an old GM van that contains nearly all the body panels of a Riley One-Point-Five, along with that model’s distinctive two-tone seats. On the way we pass what appears to be an interloper in the form of an Opel Rekord. 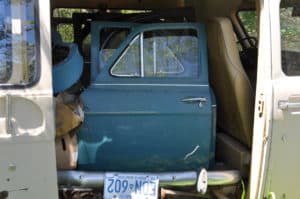 “It’s the same as a Vauxhall,” explains Joe without missing a beat.

When we get to the van, Joe slides the door open to reveal the cherished Riley parts. Says Joe, “A buddy of mine, Norm Mort, asked me what car I’d want if I could have any car, and I said a Riley One-Point-Five. Terrific little cars.”

“I guess I’d better keep these,” he says sliding the door shut with a decisive thud. 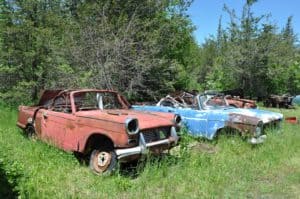 Eventually Joe stopped rescuing old cars and didn’t add a vehicle to his yard for ten years and counting. Some were dragged away for parts and some contributed to a “parts corral” in a small barn on the property as the attempt was made to box and catalogue thousands of them over the years. Unfortunately, it’s now a challenge for Joe to identify many of the parts.

“I had so much stuff I lost control,” explains Joe. “I no longer knew what I had.”

Personally, I was thrilled to find a pair of headrests in excellent condition for the 1969 Ford Cortina GT that I own. Mine were missing and a replacement pair was not to be found. Turns out Joe has a blue 1970 two-door Cortina with its engine long gone, but the unique headrests – true “unobtanium” – were there for maybe the only person in the world who wanted them. That pleases Joe. He’d love it if more of the rare and useful parts in his yard could be salvaged. On the way back to his house, I’m surprised to see a Mk 3 Cortina, only available for two years in Canada before being replaced by the “sexy European” Mercury Capri. Nice lines on that car… 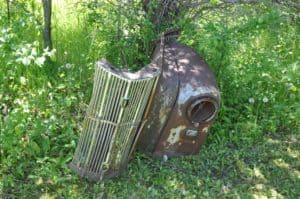 Nearby is the expressive grille from the Prefect, now separated from its body and looking like it needs a helping hand. Behind a tree you can make out the shape of a Plymouth Arrow (formerly Sunbeam Alpine) and over there’s a Triumph Herald, its Michelotti lines unmistakable. A Vauxhall Viva Estate is nudged in between an MGB and a Marina, and what looks to be a Sunbeam Rapier and an HA Viva are losing a battle with an aggressive shrub. An Austin Gipsy — Austin’s attempt to compete with Land Rover — languishes permanently off-road. An Austin 1800, the so-called land-crab, slowly decomposes while a Farina-bodied Cambridge flashes what’s left of its paint in an apparent attempt to get your attention.

Well it’s bittersweet, I tell you. 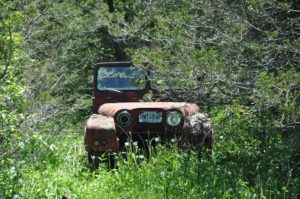 Protected from the elements is one car Joe really wants to get on the road. His history with this particular 1956 Austin A35 Pick-up goes back decades. Only 475 were built and Joe knows he has way too much in this car that still needs extensive work. It’s a quirky little vehicle, but needy.

You often hear about cantankerous codgers with a yard full of cars, a suspicious attitude and a Rottweiler guarding the property, but Joe’s none of that. He’s affable, still car crazy and easy to talk with. He’s just kind of overcome by what he’s wrought.

Nonetheless, at 73, Joe is selling modern vehicles through Joe Lightfoot Motors and has become an enthusiastic vintage racecar driver (you’ll find him behind the wheel of an MGB at local events). Meanwhile, and it’s clearly difficult for him, he and his wife are now vacating their property and realistically there is no buyer for an 18-acre Prince Edward County lot that includes a nice house with a fine garage, a 19th Century log cabin, a barn and vast collection of rusting old British cars. The property, sure, but the cars… no way. You certainly won’t see pictures of them in the current real estate listing, and soon you won’t see them on the property at all.

“$175 a ton,” says Joe philosophically. “It’ll be quick. They’ll come with their machines and scoop them up.”

The real estate sign is already at roadside. Amusingly, for those in the know, the online listing describes the property as having “ample parking for cars.” Across the road is one of the many wineries now prospering in Prince Edward County, but there’s no mistaking Joe’s place, at least for the time being. A vintage Ford Consul decorates the front yard.

“It’s going to be tough when they’re taken away,” says Joe of his collection’s imminent demise. “But right now I sit on my back porch and look out and think, well… this is an awesome place. I’d like to keep it forever, but I have to move.

Should you need parts or be interested in a unique Prince Edward County property, contact Joe Lightfoot through his Joe Lightfoot Motors advertisements on Kijiji. 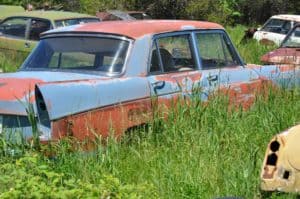 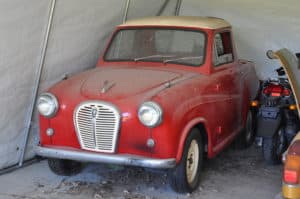 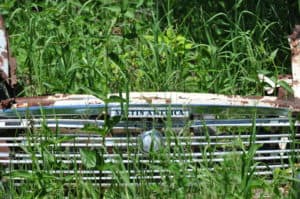 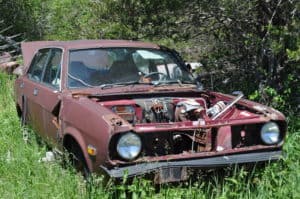 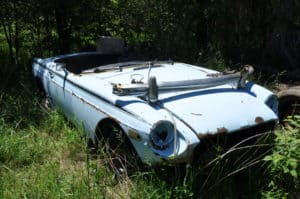 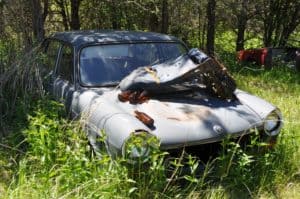 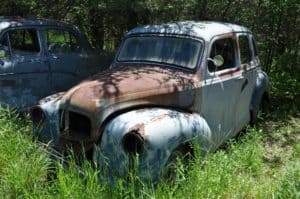 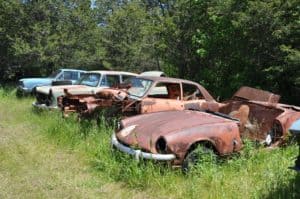 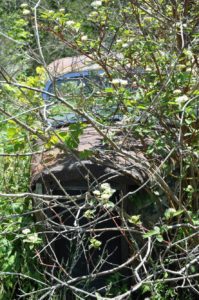 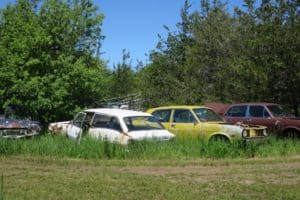 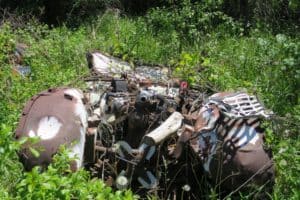 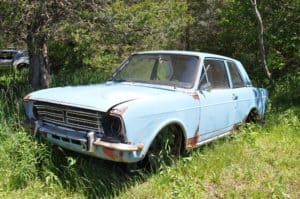 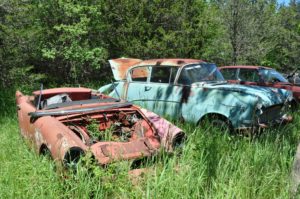 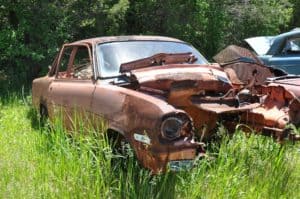 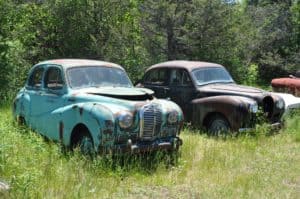 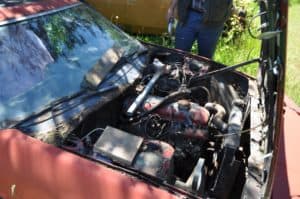 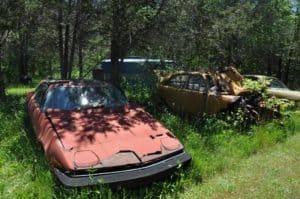