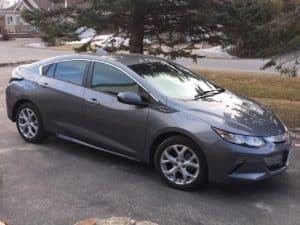 Well, General Motors has cancelled further production of the Chevrolet Volt. Disappointing, for several reasons. The first is that it’s an excellent car, and in my opinion, the best plug-in hybrid (or more accurately, Plug-in Electric Vehicle) on the market. Because of that, I’ve recommended it to people considering a vehicle of this type, and last year I put my money where my keyboard is and bought one myself.

I share the opinion that the Volt is precisely the kind of car General Motors should continue to make available. It’s a modern, practical, electrified liftback that enables owners to drive almost exclusively on electric in the city and take long highway trips courtesy of its reliable, range-extending and multi-award winning Voltec drivetrain. Everyone who’s taken a ride in my car has been impressed with its quality and technology. It’s actually elevated some people’s opinion of General Motors.

That said, I was aware GM was not going to stick with the Volt in its current form, although it was previously announced by GM that 2022 would be the last model year. However, I didn’t think they’d abandon the model completely (and if they’re not going to do that, why not say so?). Unfortunately, GM has a history of this kind of thing. Just when they get it right, they get it wrong.

Why they would cancel the Volt outright is beyond me. I get it that GM didn’t sell huge numbers of Volts (although they did apparently move over 165,000 of them), but these are early days in the transition to electric vehicles and the emergence of a functional charging infrastructure is only recently gaining traction. Fact is, GM has hardly sold any battery-electric (BEV) Chevrolet Bolts either (a vehicle scheduled for an all-new version in 2022), but they might have sold more if it was appealingly designed, better marketed and didn’t have a ridiculous name. Likewise, they also might have sold more Volts if they had chosen to market it effectively.

The timing of this decision is suspicious. Yes, GM previously suggested Volt would not be continued, but the Volt Ambassador service for Volt owners was still operating the last time I checked, and Chevrolet updated the car for 2019, significantly improving its charging system (halving the time it takes to fully charge), adding sound effects to assist pedestrians hear the formerly silent Volt approaching, adding a new colour, among other enhancements. Why bother if you know you’re ending production of the the 2019 car in March 2019? To me it sounds like a hastier decision was made, by people under pressure for other reasons.

Either that, or they’re just knuckleheads at GM.

The fact is that the Volt is a perfect transitional vehicle to an EV future. It’s a useful four-door hatchback with up to 105 kilometers range on battery alone in my experience. This means you can pretty much drive it every day in the city without using gasoline, which we do. In the model lineup, this should make the Volt an excellent complement to the fully electric Bolt. 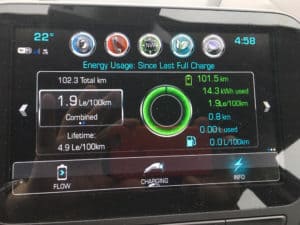 Best I’ve achieved is 105km on electric only. This is close.

And if you do need to make a longer journey, the Voltec drivetrain extends Volt’s range to 600 km, and at the time of this writing, there’s no other vehicle that can do this. Furthermore, you are using the gasoline engine as a generator to power the electric motors, while consuming a mere 5.1 L/100km of regular grade fuel.

The Volt is a great way to get into electric, therefore, offering the best of both worlds. Talk to me about a BEV when it can drive 500km in winter and recharge in 15 minutes. And talk to me about other plug-in or range-extending hybrids when they can exceed Volt’s class-leading 100 km-plus battery range.

Criticisms are few, with cramped rear seating being a common complaint (largely, I think, because there isn’t much more to complain about). However, we have on several occasions travelled with two rear-seat adult passengers and never has anyone mentioned feeling cramped. And with the rear seat folded, cargo capacity is excellent.

An additional criticism, and one that I don’t often see, is that when Volt is consuming gasoline in Extended Range mode (as opposed to running on battery alone), it is no longer an emissions-free vehicle. It is, overall however, designated a TZEV (Transitional Zero Emissions Vehicle) using current California zero emissions standards.

Proportionately, Canadians bought the Volt in far greater numbers than Americans, and this with virtually no marketing at all. Typically, Canadian sales represent 10% of US sales numbers. The Volt managed 25%, but I admit, something over 4,000 per year in Canada is not huge. And with Ontario cancelling its green energy incentives, and similar incentives drying up in the US, sales of the Volt and other mainstream (as opposed to luxury) “green” vehicles will be compromised unless manufacturers can bring the price down.

In this article I’ve referred to the Volt as a plug-in hybrid vehicle (more formally, a PHEV or Plug-in Electric Vehicle). I’ve done this because the term is more familiar to consumers than Volt’s actual designation as an Extended Range Electric Vehicle (EREV). Yes, like a PHEV, Volt combines a battery and gasoline engine to power the car, with the battery able to power the car for a certain distance until it’s depleted, at which point the engine joins in and you continue driving.

However, in a conventional PHEV, that combination of battery and engine directly drives the wheels, whereas in the Volt both the battery and engine power electric motors that drive the wheels. That’s the subtle but important difference. In my experience in the Volt, in the warmer months I’ve driven locally up to 105km on battery alone. By then I’m usually done for the day and I plug it in to fully recharge the battery at low-peak rates overnight (I have a 240V home charger in the driveway). That’s our normal daily routine with the Volt.

If I want to continue driving after depleting the battery, though, say driving from Ottawa to Toronto, the Volt’s 1.5L gasoline engine kicks in and works with the battery to drive the car. As mentioned above, the brilliance of the Voltec drivetrain is that the engine doesn’t normally drive the wheels. Instead, the engine acts as a generator to the electric motors that drive the wheels. Hence Volt’s official designation as an Extended Range Electric Vehicle, or EREV.

I know, a bit complicated. Think of Volt as an enhanced PHEV, or maybe just a plug-in hybrid…