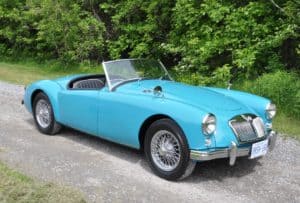 In 1955, the MG car company finally introduced its all-new sports car, the MGA. It replaced the vintage MG “T” series cars that dated back to the 1920s, and in doing so, belatedly left behind the era of the car as motorized carriage.

The MGA, in contrast to the charming but primitive previous-generation MG TC, TD and TF, was a modern, streamlined thing of beauty, perhaps taking its design cues from the bigger, more expensive Jaguar XK-120 released a few years earlier.

I purchased a 1956 MGA in the fall of 2011. I knew that even though the Virginia-sourced Glacier Blue MGA was “partially restored,” this likely meant it was 20-percent “restored” and 80-percent “partially.” But it looked good (fabulous original colour, I thought) and was inexpensive enough to permit the period of irrationality required to take delivery. Once in my care, the vastness of the project revealed itself. 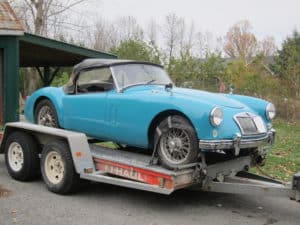 Turned out there was much more body filler than expected, and the engine, while sounding pretty normal, was sending no oil to the cylinder head. The wheels were toast, as were the tires; the gauges didn’t work, the windshield was cracked and its frame was pitted and dull, there were dents in the hood and trunk lid, the brake master cylinder leaked, the exhaust system was unattached to the engine and the frame for the moldy convertible top was held together with what appeared to be stove bolts. Furthermore, one rear fender looked suspiciously bigger than the other.

Other than all this, it was, you know… good.

Many of the MGA’s exterior panels are aluminum so when it comes to restoring one, bodywork can be tricky. Panel fitment is a particular challenge with ill-fitting doors a common issue. This car was not going to be driven anytime soon, but I thought maybe spring 2012 could work. 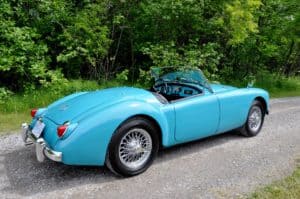 Fortunately, I had British car mechanic/restorer up my sleeve. Steve Hayes, recently arrived from England, was busy establishing Classic Automotive Repair, his ticket to success in Canada (he’s an optimistic guy, is Steve). He’d shown a sweet Ford Cortina GT that he’d restored at the annual British Car Day in Kingston, Ontario, and it was a truly impressive piece of work (it, too, is now in my possession). I thought it would be good to give Steve the MGA for a similar restoration. It would help him get his business off the ground (Lord knows, we need more old car mechanics in the trade), and he seemed a stickler for detail, which is good when you’re restoring cars.

So off it went to Hartington, Ontario, just north of Kingston. As people experienced with car restorations understand, it’s never as straightforward as you expect. You know the old adage about renovating your house? Get a quote and double it? Car projects are like that. 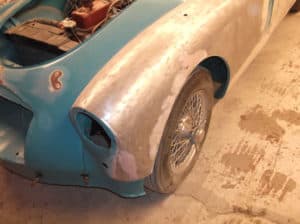 Steve sent the car to a colleague down the road for bodywork and paint, and that just about blew half my budget right there. Stripped down, it was clear that the work would be difficult and extensive (the swollen fender contained about an inch of bondo; the paint hid a history of crude, unsympathetic work in the delicate aluminum). The decision was made to remove the filler and painstakingly hammer out the panels rather than buy new, so the car, as far as I know, is still wearing its original sheetmetal.

But this was fussy work and time consuming, especially in a shop that was also moving crash repairs through on a daily basis. Eventually, the MGA was in primer, then paint. What a colour! The car just glowed! Furthermore, everything was straight; the doors lined up flush with the sills and fenders; the shut lines were even; the panels were perfect. Big sigh of relief and appreciation for a job well done.

Of course it still didn’t run, the suspension and brakes were a mess, it had no top, interior or wheels and nothing worked. The engine, of course, was already out. But apart from those issues, things were dandy. 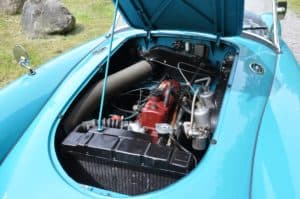 The other factor was that it was now April, 2012, and apart from supervising the work this far, Steve’s role had basically been to identify parts required, and source them (fortunately, MGs are popular and several companies supply parts for them).

The 1.5-litre engine would need to be rebuilt or replaced, and it was certainly an option to replace the engine with a more powerful 1.8L MGB unit — it drops right in and is a common swap. I stuck with the original engine, bored out sixty-over, but like the panels, it’s the one that came with the car, so in order to maintain originality, it remained. In retrospect, I should have gone with a “B” engine. Road trips have convinced me that it would give superior service, and as the car’s not restored to Concours condition, drivability is key.

Spring sprung and my registration for the annual MGA car show (NAMGAR – North American MGA Register) in Dayton, Ohio, became an involuntary contribution to the club as I was going nowhere yet in that MGA. 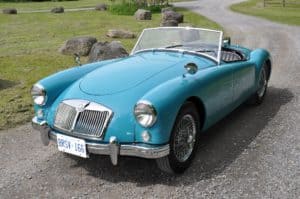 Pretty much everything was finished, however — except for the engine, gauges and interior — by August 2012. Steve hauled it down to that year’s British Car Day in Kingston where it nonetheless won Best of Show! Everyone agreed it was a looker; I just wanted it to be a “go-er” as well.

The engine was rebuilt in late fall, early winter, and installed in the car after Christmas. The convertible top and Moss Motors leather interior kit (complete with white piping) was installed and looked great. I took delivery in May 2013, and registered it for the next MGA car show in Asheville, North Carolina. My partner Susan and I left almost immediately thereafter, without having “sorted” the car, as they say.

Which brings me to some observations about this car as a long distance driver. First of all, it has no windows, as MGAs didn’t come with windows (other than the windshield). It also has no handles on the doors, and no glove compartment for the same reason (it’s unbelievable to me that people drove these cars 12-months a year in our climate, but many did!).

Needless to say, it doesn’t have a radio, nor did it come with seatbelts (I fitted lap belts). Inside, there are no storage compartments other than map pockets in the doors. You start it by turning the ignition key and pulling the knob marked “S” (a good anti-theft device, I guess). 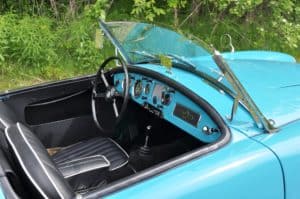 It does possess one of the finest expressions of British Contraptionism ever devised, in the form of the MGA convertible top. You could not make anything more difficult to stow or erect if you tried. It takes me a good 10 minutes to put this top up, and then, of course, you’re faced with the absent windows.

To deal with that, a period “extra” was what the British described as “weather equipment.” This took the form of aluminum frames with plastic (“Perspex”) sliding or hinged windows that you fit on each door to keep the rain out. I bought new (again from Moss) and like many people I found they needed significant adjustment to fit properly.

Fit they ultimately did (sort of), but a new challenge is getting into the car because the doors don’t seem to open with the weather equipment in place. All part of the allure, right?

But before heading out on a long trip, any untested car really does need to be driven. We did manage to take it out during a break in the winter-like weather that passes for spring here in Ottawa, and it drove well (no unplanned stops, in other words). Observations were that this MGA is very tight; the steering is positive; it crunched into second gear when downshifting from third; the pedals are really close together; it’s more comfortable that you might expect; it looks awesome, it’s VERY SMALL! Honda Civics, for example, tower over you.

Ever optimistic, I decided not to take a spare tire to Asheville (actually, I didn’t have one). The other consideration was that if I did have a spare tire, it would go in the trunk, all but completely eliminating room for luggage. Personally, I don’t think MG ever expected people to make 4,000 km journeys in their cars (the MGA hails from a country where people used to pack a lunch when driving from London to the seaside, about 90 km total), but short of drilling into my pristine aluminum trunk lid and fitting a luggage rack, we went sans spare. 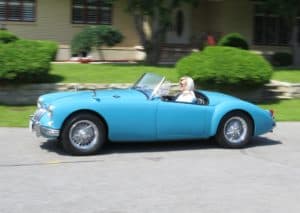 Honestly, you feel like an explorer driving a car like this; a land-based Sir Richard Branson (albeit without the billions and the teeth). I also own a Honda S2000 and believe me, it’s a blast. But you’re pretty certain you’re going to arrive when you set out in a Honda. In an MGA, and most other “classic” cars, everything’s on the table. Every trip really is an adventure.

We left June 7, 2013, part of a small convoy consisting of two 1956 MGAs, one 1954 MG TF and an MGB. My companions in the MGA and TF carried spare tires that fit my car, so I made a special effort to stay on their good side!

What I can report is that we made it there and back without problems. We hit torrential rain, blistering heat, steep inclines and some alarming descents, but the car was good. In fact, five years on our car continues to be a source of enjoyment, challenge and fun.

A few more observations, though. In the event, I did drill into the MGA’s delicate trunk lid in order to install a luggage rack. It’s not for show; we use it. I carry a spare tire, not wanting to tempt fate too much. 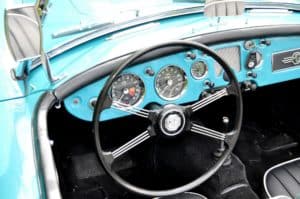 The old gearbox is gone, replaced by a five-speed Ford Sierra (European) unit. I wrote it up here. It has synchromesh in all five forward gears, but that’s just a bonus. Acceleration off the line is brisker, cruising in fifth is quieter and more fuel efficient, the lower engine speed contributes to more efficient engine cooling and makes for an overall more agreeable driving experience.

Speaking of engine cooling, check out the picture of my car on the trailer. That was when I bought it. Note the little air vents built into the front fender. These are not original, and allow additional ventilation into the cockpit. I had them removed and had the car restored to original. You know what? aesthetics and originality aside, the MGA can have a mighty hot cockpit and those vents would have been appreciated…

My new convertible top sourced from the inimitable Cecilia of Scarborough Faire in Rhode Island is a fine thing. I elected not to get one with a zippered rear window. Duh. What was I thinking?

Our route to Asheville 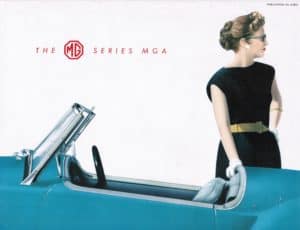 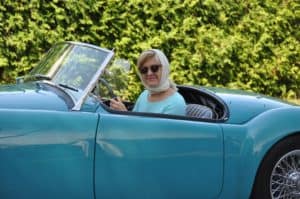