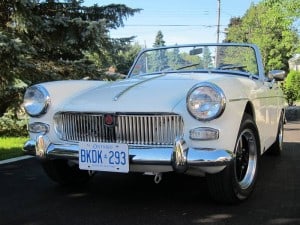 A recent addition to my personal fleet was a 1968 MG Midget, which astute readers will quickly deduce is not a large car.

I couldn’t resist. It called out to me via Kijiji from the mists of time and suburban Brampton, Ontario, where its owner for the last 32 years was fretting about selling it to some moron (his words) who’d stuff a V8 in it, or otherwise presume to “enhance” its performance and appearance.

I liked it just as it was, convincing myself that this car was so small that it hardly constituted a car purchase at all.

Granted, there are other tiny cars on the road — like the Smart ForTwo, for instance — but the Smart car is tall and boxy, and it doesn’t really look like anything else. The Midget, in contrast, has the familiar form of a two-seat roadster like the Mazda MX-5, only it’s about two-thirds the size. It is truly a miniature car. 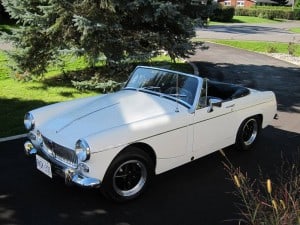 But it has pretty much everything you need for efficient personal transportation. It has a trunk, a heater, a seat for your passenger, space behind the seats for your groceries, a convertible top that stows neatly under the rear bulkhead when not required, and other conveniences like disc brakes, rack-and-pinion steering and seat belts.

What I have found when driving around in this vehicle (aside from the occasional person who bursts into laughter at the mere sight of it), is that you don’t really need much else.

Granted, my Midget doesn’t have a radio, and that could be nice. But then again, it has a nice factory exhaust which really makes its little four-cylinder engine sing under acceleration.

Its grille is a work of art, making the Midget look for all the world like a small dog with its teeth bared, doing its best to appear fierce in spite of its diminutive proportions. It’s kind of a Jack Russell of sports cars.

That grille, by the way, is an impressive stainless steel construction of 42 pieces (not counting the rivets, nuts and bolts used to hold it together and in place). Believe me, they don’t make grilles like this anymore (they don’t make anything on cars like this anymore). Grilles today, if your car even has one, are made from one or two pieces of formed plastic that snap into inexpensive surrounds. No-one manually assembles grilles from 42 separate pieces of metal. 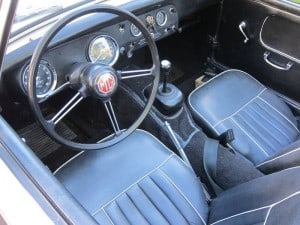 Inside the Midget there’s more metal. The dashboard is a solid piece with black crackle paint offering a pleasant texture, although it is thoughtfully finished with a one-inch strip of vinyl-covered foam to arrest the forward motion of your head in the event of a crash. The door handles and window winders are also heavily chromed, as are the instrument bezels and the dangerous-but-wonderfully tactile toggle switches (there’s even a separate switch for the instrument lights marked “P” for Panel…). The chrome door latch is strangely located next to your shoulder, its design a marvel of British contraptionism.

The Midget’s fenders are so thick that you can thump them with your fist or put your knee into them and there isn’t the slightest give. And you could undertake a fitness regimen by raising and lowering the hood, such is its weight.

Fuel economy, as you might expect, is pretty amazing. The fuel tank holds 27 litres, and I used about half of it on a recent 200 km Sunday drive during which I was easily able to keep pace with the general flow of traffic at 90-105 km/h. 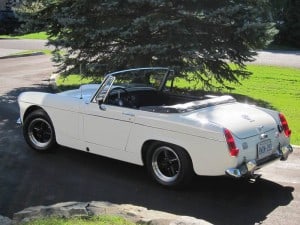 But being so close to the ground, it felt like I was doing at least 160, which certainly heightens your attention.

Here’s the point, though. The car is a lot of fun. Yes, it does get you from A to B, as does any vehicle worth its salt, but in a Midget you have a great time doing it. Forty-five years ago, cars like this were advertised on the basis of these same attributes: fun, economical, sporty, useful. Then as now, the intent of the vehicle seems just as relevant. It’s just that everything’s become so much…more.

During the summer, I’ve been driving the Midget to the supermarket, to visit friends, to restaurants and even participated in a car show (where, if you’ll excuse the mixed metaphor, the Midget was dwarfed by the usual array of American muscle).

But most people just love the look of this little car. They marvel at its proportions and its character. Would people still buy cars like this if manufacturers offered them? Could car companies make any money building basic little roadsters? (That’s the real question, I suppose), Sure, they’d have to be safer and conform to all the crash-testing requirements. They’d have to be emissions compliant.

Probably not, is the realistic answer.

A cross-country tour would be something of a challenge in an MG like this, but for local, three-season transport, I’m definitely a Midget man.

Or at least, I was. The Midget found a new home recently. Small as it is, I had nowhere to store it. A buyer was quickly found. He got a good car!