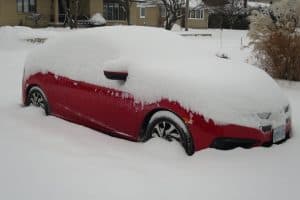 It’s early Monday morning, and winter in Canada. The eyelids of most Canadians are reluctantly fluttering into wakefulness as clock radios come alive. First item of the day? The weather, of course. In Ottawa, it’s minus 10 degrees, a light snow is falling, and school buses in the entire region have been cancelled due to treacherous driving conditions.

But unknown to most, across the country an intrepid group of professionals is already out there, battling the elements. No, not snowplow operators… We’re talking Canada’s Automobile Journalists.

Fighting their way through deep drifts in their mukluks and branded toques, wielding nothing more than a wooden snow brush and a keyless remote, they’ve begun the weekly ritual of swapping vehicles. Returning the old, picking up the new, it’s another “Push to Start” button to be found, another review to be produced.

Often this is not easily achieved. The weather (see above) may not cooperate, the clock radio may fail to have been set, the will to rise may elude, and in the winter, long underwear may not be readily located.

But it’s Monday, and they have no choice.

What… you thought auto journalists live on giant estates with heated outbuildings for their collection like Jay Leno? Not so! Some — truth be told — don’t even own a car! No, the reality is much more mundane. Vehicles are simply borrowed for a week, sometimes longer, then returned to a pre-determined drop-off location or handed off to the next test driver.

Indeed some are forced to drive a new vehicle every week of the year!

Here’s how it works. Car manufacturers set aside a number of vehicles for members of the media to drive with a view to publicly commenting on them (positively, they hope) in their respective outlets. The arrangement is that you’re expected give media coverage in order to get into a vehicle, which is fair enough. And just so you know, it’s the media outlets who (appropriately) are obliged to pay the writers for their articles, not the manufacturers.

Somewhat anachronistically, these vehicles may still be referred to as the Press Fleet, a term that recalls the days when actual presses were used to print articles on paper. Interestingly, the writers of the articles eventually acquired the same name as the machines used to print them. Thus, The Press. Now, obviously, the name should be changed to Media Fleet (and it may well already be), because newspapers as we knew them are, you know, history. But I think that “Press Fleet” (like Press Club or Press Credential) still accords an elevated level of credibility (plus I actually remember presses!) so let’s just stick with that.

Anyway, where were we? Oh, yes… all (well, most) car manufacturers set aside a number of such vehicles and locate them in Montreal, Toronto and Vancouver where the majority of Canadians, including automobile writers, reside. Those who perversely choose to live in remote locations like Sudbury, Saskatoon, Ottawa and even Dartmouth, Nova Scotia, for goodness sake, may — through a combination of manufacturer largesse and dogged determination, coupled with a self-sacrificing commitment to journalistic ideals and the fact that they simply like to drive new cars — also manage to get their hands on them.

It’s the manufacturers’ Public Relations department that oversees deployment of the Press Fleet vehicles, should you aspire to the craft and wish to inhabit one for a while. Mentioning that you know me is unlikely to help as my name (despite the sparkling personality) is no longer found on media event invite lists. Then again, it may among some of the veteran PR types still have currency. Either way, I am definitely former, but you’re welcome to give it a shot.

That said, back to business. There are responsibilities you assume when test-driving a Press Fleet vehicle. First of all, as I say, you have to comment in a somewhat timely and marginally literary manner. Additionally, returning the vehicle intact is a good way to get another one. Other expectations are that you won’t enter it in the Rally of the Tall Pines, or rent it to an Uber driver (or use it as an Uber driver, come to think of it!). Other than that, you can pretty much have your way with it.

Some auto writers in Canada (traditionalists, I admit) ensure that the vehicle – which is ideally received freshly-washed and with a full tank of fuel – is returned in the same pristine condition. Yes, even garbage should be removed after use!

It’s something of a courtesy to do these things, which is reason enough, but the practice also demonstrates a capacity for objectivity (or at least an understanding that this might be important) given that manufacturers don’t pay for the gas and therefore can’t influence your opinion by offering this and other tempting benefits (the occasional ball cap or key ring notwithstanding).

So it’s customary for the test driver to pick up the vehicle and cover the gas, although on some occasions and in certain circumstances, a press vehicle is actually delivered to a journalist’s home, American style (yes, in the US, the cars are delivered to your door — or so I’ve been told — with a full tank of gas and picked up a week later without a drop in the tank). In my experience, the American press is far more pampered than their Canadian equivalent, but that is there and this is here. 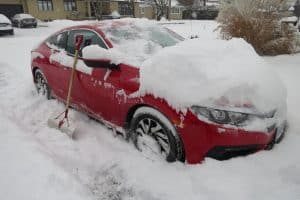 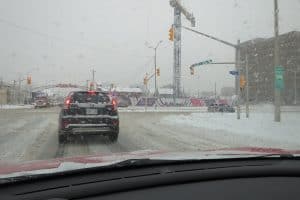 Take this morning, for instance: up while still dark, the light snow raging with 20 centimeters on the ground and counting. A hearty breakfast of raisin bran, a mug of Bridgehead “Bytown Boom” coffee to kick-start sentience, followed by the intention to do ten pushups and a gentle stretch in preparation for The Outdoors. Then the parka (a gift years ago from Volkswagen Canada when they abandoned us on a frozen lake in Northern Sweden with a group of Lapp Dancers which, while it sounds kinky, was not as much fun as you’d think), the aforementioned mukluks (Toyota… Fulda Challenge), a pair of Hot Paws (same), either a British-style flat ‘at or a toque, a peck on the cheek from the significant other who hands me a flask of the remaining coffee and then I’m out there, briefly, on my own.

I say briefly because most recently I forgot the snow brush and the key to the Honda Civic Coupe that I’ve been driving for the past week and locked myself out. Problem eventually solved, I’m alone again (naturally…) in the grip of what has turned into a genuine winter storm. As is usual in Canada for most of the year, the car, the driveway, the road and my legs are barely visible due to the preponderance of what we here affectionately call, “the white stuff.”

But pro’ that I am, or was, I had anticipated this, and filled it up the preceding evening. Furthermore, I am now choosing not to wash the car as is customary and despite the legitimate caveats above. There’s no point; it will be a mess by the time I make it across the border into Gatineau where the weather will surely be that much worse, what with it being Quebec and all.

My task is to meet another journalist at the Honda dealership which is our place de rendevous where I’ll deposit the Civic (which I’ve just noticed is wearing expired plates!!). If I don’t get stopped, ticketed and fined en route, I’ll hop into a Hyundai Santa Fe and my colleague will drive us back to Ottawa and the more tidily plowed roads of Ontario. There he’ll transfer to the new Volkswagen Golf Alltrack, a vehicle that should offer some confidence given the slippery surfaces, and I will depart in the Santa Fe. This is how it’s done when you get along with your colleagues, with sometimes three or even four of us participating in a game of musical cars. That, though, can take a full day and may require an extended lunch during which we’ll ruminate on subjects germane to our field like mid-cycle refreshes, comparative trim packages, and the startling disappearance of media outlets.

But today it’s just the two of us and personally, I’ve already driven the Alltrack and blathered on about how the thing can’t even tow a shopping cart. But I do like it and would recommend it with reservations (an opinion that was not influenced by the fine Canada Goose parka given to me by VW … did I mention it was Canada Goose? It was. And genuine, too. Means nothing to me. Well, not nothing…). I like the Civic as well, although it sure needs a windshield wiper to help with that vast expanse of rear glass. But coupes rarely get a wiper. Wipers aren’t sporty enough, I guess. 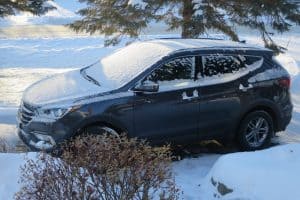 Anyway, here I am in the Santa Fe, and mission accomplished. Next Monday it will be back to Quebec for a Honda Ridgeline. At least I hope so, as I noticed somebody had returned the Ridgeline to the dealership…um… in distress, shall we say. It happens.

So it is on the endless roller coaster of automobile journalism. Four-wheel fun punctuated by Mondays, when everything changes in a way.