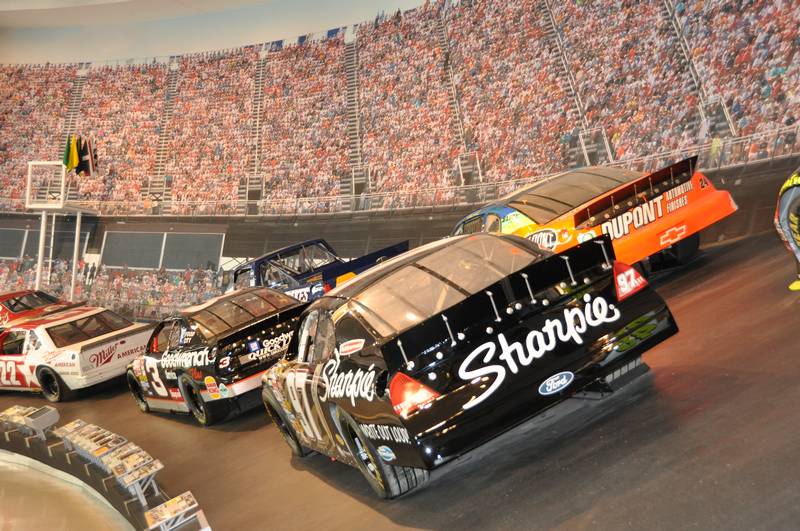 Charlotte, North Carolina
Driving to or from Florida anytime soon? Hey, the question’s not so far-fetched, especially if you live in eastern Canada. Many so-called “snowbirds” make their annual migration south each winter, returning in the spring. They surely know the Interstate options by heart — I-75, I-77, I-81, I-95 — depending on their point of origin. Others just want to head for the beach in a mad dash to escape the winter doldrums.

While travellers may be keen to get to the warm weather, there are many interesting stops on the way to break up the monotony of a long, four-lane highway drive. If you’re a car enthusiast, for instance, Charlotte, North Carolina is the site of the recently minted NASCAR Hall of Fame, and it’s quite a place.

But full disclosure: I don’t follow NASCAR and come to think of it, have never even watched a race. The series has just never held any allure for me. That being said, I’m game for something new, and this hall indeed qualifies.

Charlotte, it turns out, won a competition in 2007 to build the NASCAR Hall of Fame, and it opened a scant three years later, in 2010. It’s now owned by the city and operated by its Regional Visitors Authority. The 150,000 square-foot Hall of Fame is housed in a downtown building notable for its striking exterior “speed ribbon,” an 1,800-foot (600 metre) lighted architectural garnish designed to symbolize the speed and spectacle of motorsports, NASCAR style. The Hall of Fame’s interior is dramatic and engaging, featuring exhibition design by the award-winning Ralph Appelbaum Associates.

Even if you’re not a NASCAR fan, entering the Hall of Fame and walking along “Glory Road” is a memorable 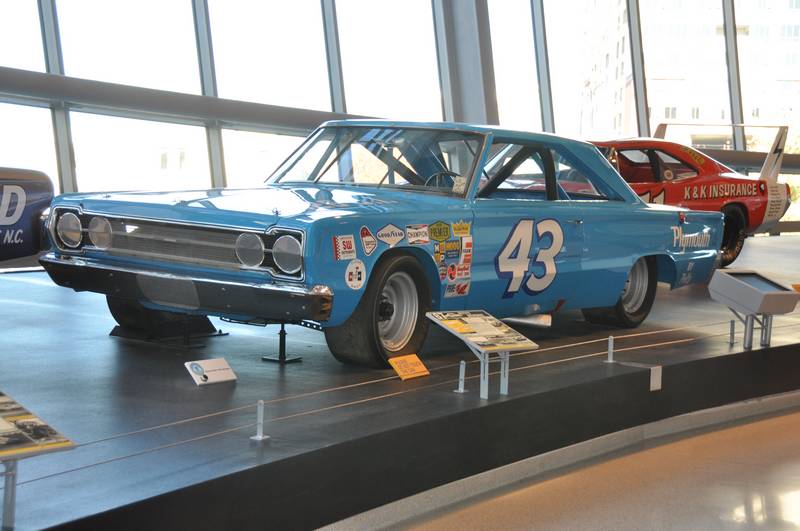 experience. It’s a banked ramp, angled at between zero and 33-degrees, that corkscrews up and into the exhibit floors. On Glory Road, 18 pristine cars are displayed against a backdrop of 40 current and historic racetrack images. “Number 43,” Richard Petty’s celebrated Plymouth Belvedere, is one of the cars. It was driven by Mr. Petty to more wins than any other car in NASCAR history (36, including a record 10 straight races in 1967).

There are two opportunities for visitors to actually stand on the track component of Glory Road at points banked at 14 and 33 degrees (the latter giving you a dramatic sense of Talledega Speedway’s driving surface). Otherwise, you walk at a gentle incline past each of the vehicles, most of which are close enough to get a good look inside.

NASCAR, the North American Stock Car Association of Racing, if you didn’t know, emerged from popular races in the 1940s held at Daytona Beach in Florida (NASCAR’s headquarters are still at Daytona). At a now legendary 1948 meeting in the beach’s Streamline Hotel, race driver and NASCAR founder Bill France, along with a large group of drivers, codified and established a set of rules and practices that formed the basis of this racing series into the future. Mr. France’s grandson, Brian, is the current CEO of NASCAR, which remains a private, family-owned enterprise.

NASCAR’s history is well-represented at the Hall of Fame, with over 1,000 artifacts, numerous vintage race cars, and exhibits featuring influential and popular drivers, engine builders, technologies and race shops represented in the Heritage Speedway section of the facility. Visitors are given a “hard card” which can be personalized and used at most of the exhibits to access detailed information and “hands-on” experiences via celebrity guides. Basically, you program the card at entry and select a NASCAR driver as your avatar throughout the visit.

So it was that Tony Stewart explained the intricacies of suspension setup to me, along with tire selection, engine management and race strategy at various stops during my visit. In fact, along with the comprehensive historical section, the NASCAR Hall of Fame goes quite heavily into the behind-the-scenes dimension of motor racing, focusing on technology and engineering more than you might expect for a facility of this type.

Recreations of race shops, both current and historic, are typically rendered precisely and full-scale, giving visitors a genuine sense of these environments and how they operate (and operated). Additionally, knowledgeable docents are present to answer questions and demonstrate how things work. These people have a racing and/or technical background, are keen to talk and further add a unique level of authenticity to the visitor experience. 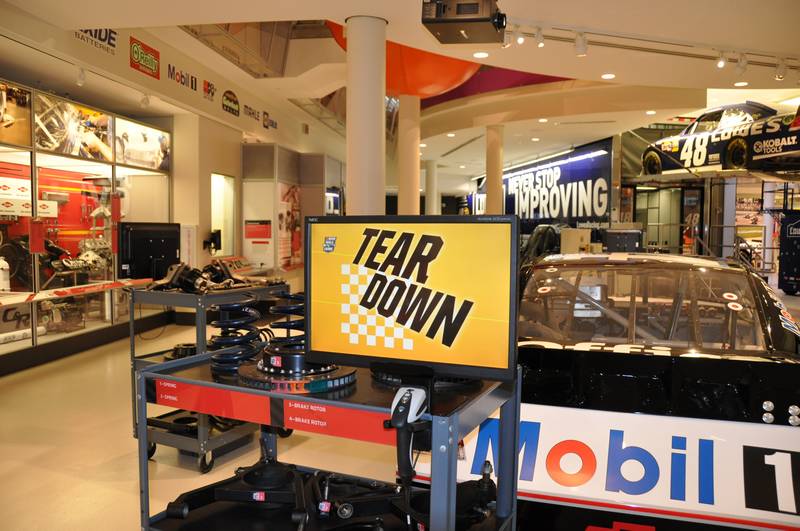 I particularly enjoyed the Race Simulator, an installation featuring real NASCAR vehicles that you get into, settle behind the wheel, and drive in competition with other visitors. The simulator uses software and technology that apparently creates an accurate approximation of driving a NASCAR vehicle in a race, although you do get personalized in-car feedback on your driving technique via simulator attendants. Mind you, I did crash my car too frequently, and if this really is the way these vehicles feel on a track, I’d better develop a lighter touch. As a race driver in the simulator, you also get to pick a nickname, but be aware that it’s flashed on a giant results screen for all to see. In my case, I think people expected a different-looking Horny Toad to emerge from the car…

But being a Hall of Fame, there are, of course, inductees. They are reserved for the top floor and currently number less than a dozen due to the newness of the facility. This doesn’t detract, in my opinion, and may even enhance this Hall of Fame for some. Other halls of fame, like the Rock and Roll in Cleveland and the Country Music in Nashville, have so many inductees that the entire facility is generally comprised of small showcases each containing a guitar, a pair of well-worn shoes, a stage outfit, a hat… you get the idea. Those halls celebrate the inductees arguably to the exclusion of the social and commercial context in which they performed. In contrast, because the NASCAR Hall of Fame is still very young, it’s packed tons of interesting contextual material onto its floors, including many vehicles, big advertising signage and even a Daytona 500 media observation booth in the form of a giant orange. Over the coming years there’ll be many more inductees, with the top floor having plenty of space to accommodate them. In the meantime, there’s a whole museum of NASCAR history to explore in addition to sections that focus on key individuals. For me, it’s a good mix.

As observed above, there’s lots of engineering, technology, equipment, machinery and cars in this Hall of Fame, and as you might expect, many opportunities for in-depth appreciation and understanding of NASCAR’s history and evolution. But if you have young children with you, it may not so engaging for them. No cars for kids to clamber in, no helmets to try on, no fun games to play. For children, it’s more didactic than entertaining, I’d suggest; more adult.

However, my takeaway was that l learned a lot about NASCAR. I may even watch a race now!

What? NASCAR Hall of Fame