Volkswagen Beetle “in the pink!” 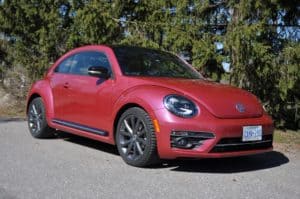 “You’ve got to be a confident man to drive a car like that!”

Hey, I didn’t say that. It was an opinion voiced by a customer at the local Volkswagen dealership as I parked and exited the $26,690 2017 Volkswagen Beetle Pink edition. And furthermore, I didn’t hear her say it; she was addressing another woman who happened to be standing nearby. That woman, unbeknownst to her, was my partner, Susan, who had just dropped off her Tiguan for service and was waiting for me to pick her up. Susan had been the principal driver of the “Pink” over the past few days.

“Oh, it’s my car,” Susan said to the woman (avoiding the more complicated explanation). “He’s mine, too.” Meaning the confident man.

So it all became clear as mud. Turns out, Susan’s decided she loves the Beetle Pink, but more on that later. When I drive it, nobody says squat to me (although apparently they have thoughts). When she drives it, women approach her in parking lots with compliments, give thumbs up at traffic lights and generally gush enthusiastically at every opportunity. 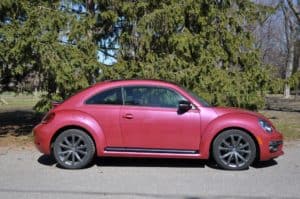 It’s the pinkness of it, you see, in combination with the cute Beetley shape. It’s apparently irresistible to many women and possibly confident men.

But first of all, let’s just stick with the Beetle sans Pink (even though it’s badged a “bug” on the rear decklid). Under its proboscis you’ll find VW’s latest all-purpose four-cylinder engine that makes a smooth and satisfying 170 horsepower while returning a thrifty 9.6/7.5 L/100km on regular grade fuel. 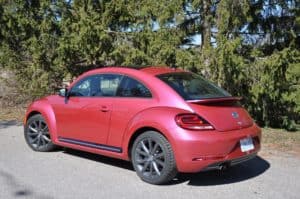 As you can see, the Beetle is a two-door coupe (which used to be a redundancy but is no more) and in its latest iteration, this newest New Beetle is lower and wider than the older New Beetle (as opposed to the original Beetle that was indeed also called a Bug back in the day). All to say, this version’s road hugging chassis and sporty suspension in combination with the sweet engine make the 2017 Beetle a very entertaining car to drive. Handling is crisp and sharp, the throttle is plenty responsive and the brakes, happily, are also powerful and predictable. You feel very secure and in-control behind the wheel of a Beetle. 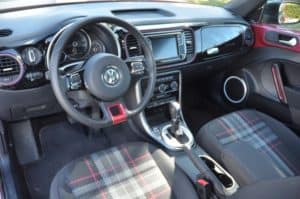 Inside, the seats are supportive and comfortable, outward visibility is good and the controls are easy to identify and operate. If you have an Android or iPhone it will connect with the App-Connect interface and you can use Android Auto or Apple CarPlay for entertainment and navigation (no self-contained navigation system is offered). 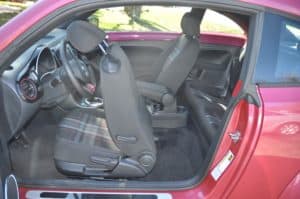 The doors are huge. This is typical of coupes, which require a large opening and correspondingly large doors to permit ingress and egress for rear seat passengers. The Beetle will indeed accommodate two back seat occupants (the front seats readily slide forward as they come and go), but I wouldn’t submit them to a long drive. At best, it’s useful but occasional seating for two. You can always drop the rear seats, though, opening up a large rear cargo compartment. This style of car is actually referred to as a liftback, which is not too common, as opposed to a hatchback.

Okay, so on to the Pink. A big debate identifying this colour, mainly because it changes quite dramatically with the light. It can be dark; it can glow. The official Volkswagen name is Fresh Fuschia Metallic. The colour is echoed inside on door panels, dashboard accents and in the pink/grey/black checkerboard seat fabric. It sounds garish, but it’s not unless you think that Fuschia by definition is garish (and admittedly there are some who may).

For the extra $6,880 above base Beetle “Trendline” price, you get more than the distinctive paint, though. You also get 18-inch Ravenna (a city in Italy) wheels with an Adamantium finish (according to Wikipedia, Adamantium is a fictional metal appearing in American comic books published by Marvel. A sufficient amount is capable of surviving nuclear explosions). Clearly, these wheels have deep meaning that goes far beyond their ability to merely rotate and complement Fuschia. 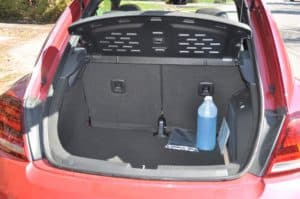 I did say she liked it and really, it was more than that. She came to like the multi-colours, liked the fancy seats, liked the driving experience and enjoyed being behind the wheel of something unusual. She said it was he nicest car she’d driven in years. Unlike me, she is a confident woman and she truly could have pulled the trigger on this model until I told her no manual gearbox.

“Whaaaaa? No manual! What are they thinking?” she exclaimed. “You can get it on other Beetles, yes?”

Indeed you can, grasshopper, but this is the last year a manual transmission will be available on a Beetle, period. Model year 2018 will be automatic only. What is Volkswagen thinking, you ask? They’re thinking that so few people want a manual transmission these days that it costs them more to supply it than the automatic. And who’s going to pay extra for a five-speed manual compared to an automatic? Nobody, unless it’s for an old Porsche 911.

So there you have it. The Beetle is a great little car. Fun to drive, sporty handling, kinda retro, reasonably priced, distinctive. Even more so in Fresh Fuschia Metallic. But it’ll handle the shifting, thank-you very much. 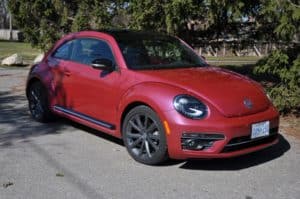