What’s the origin of the “boler” name? 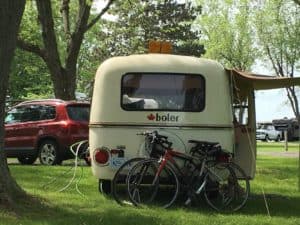 Only a few years ago, you could pick up a vintage boler camper trailer for $1,500, maybe less. But over the past five years or so, interest in these diminutive Canadian-built, 40+ year old fiberglass trailers has soared to the point that $10,000 can be asked for an example in excellent condition.

Why the demand? Well, I’ve noticed that Boomers (of which I am one) all seem have the same “original” thought at the same time. “Hey, remember those cool little trailers? We could go camping! I can tow it behind the CR-V!”

It’s true! They are cool, and you can!” (then comes the stampede to Kijiji and Craigslist).

But Millennials, too, have come on the scene. They’ve got a kid or two, and a dog. They’re into retro, they support small footprint, outdoor activities but don’t want to totally rough it. They can personalize their little (mobile) house on the prairie and see the country. And they, too, can tow one behind their CR-V.

Now there are CBC news specials; articles, websites, Facebook groups and clubs all focused on the boler, and one question that everyone eventually gets around to is, “What’s with the name “boler?”

You’ve got to admit, it’s a weird name for sure. Maybe it’s one of those made-up corporate names like Xerox or Esso, maybe it’s an acronym for something. Until recently, boler lore had it that the boler’s Winnipeg designer, Ray Olecko, called it a boler because he thought it looked like a British bolwer hat. He removed the “w” and the rest is boler history!

Problem is, Mr. Olecko designed the boler camper in early 1968, but he registered the Boler Manufacturing Company in 1963 as a maker of fiberglass sling shots. Then he got into the fiberglass septic tank business prior to camper trailers. So clearly Mr. Olecko’s use of the word “Boler” predates the existence of the boler trailer by five years, which I think definitively rules out the bowler hat explanation.

In that event, we have nothing.

However, after significant rumination and mental gymnastics, I have come up with a theory. Many people, I reasoned, look to their own name for a product or company name. They use the first letters of their names; they spell their name backwards, they combine the first syllable of their first and last name, that kind of thing. People who go this route can spend a long time rearranging letters in order to come up with something unique.

So, I suggest that the origin of the boler name is perhaps under your nose, and give you this (Please click below to animate):

You saw it here first, folks! And before you completely dismiss it, note that the first three letters of Mr. Olecko’s last name are indeed a big chunk of “boler.” And that his first name Raymond does indeed start with the letter “r.” But I grant you, reversing the lower-case last letter of his first name is a bit of a stretch (I just couldn’t find a “B.” He doesn’t seem to have had a middle name; would be great if it was Brendan or Bart, or if he had a girlfriend Betty).

Nonetheless, Ray was a creative and inventive guy! First and last letters of his first name combined with first three of his surname. It’s not outside the realm of possibility that he could have fooled around with the letters of his name to come up with boler (nothing to stop him capitalizing it later, or not). Personally, I like it!

But I must admit that attached as I am to my elegant theory and it’s very cool animated GIF, some new information has come to light. Basically, it goes something like this: Ray Olecko was a hunter/outdoorsman, he was into slingshots as learned above, and his slingshot company name Boler was inspired by a Spanish throwing weapon used to catch animals called a “bolas.” When it came to the trailer, he figured it looked sort of like a bowler hat and basically created the connection between the trailer, the hat and the nameex post facto, as lawyers put it. That is, he kind of made the old name fit the new thing, with his observation that the trailer looked something like a well-known British hat entering what would become boler lore.

Check out Tom McMahon’s extensive research on this here: History of the boler

Thanks to Luke O’Reilly for the fine animated GIF!