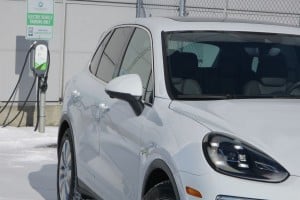 Porsche’s commitment to e-mobility extends well into the next decade and beyond, according to Porsche Canada President and CEO Alexander Pollich. At a recent information session in Ottawa, Mr. Pollich confirmed that Battery Electric Vehicles (BEVs) and Plug-in Hybrid vehicles (PHVs) will be available throughout the full Porsche model line by the mid-2020s.

Currently touring with stops at major shopping centres throughout Canada, Porsche is displaying a replica LeMans winning 919 Hybrid and 2016 Cayenne S E-Hybrid (PHV) in an effort to promote its e-mobility programme and support the transition to Electric Vehicles in general. 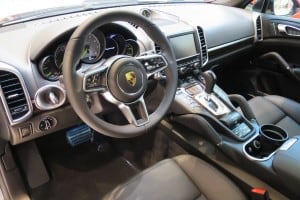 Currently under development and the focus of a $1 Billion investment, Porsche’s Mission E, first shown as a concept at the Frankfurt Auto Show in 2015, is a full BEV four-seat sports car whose twin motors will generate 600 horsepower from a battery that will deliver a 500 kilometre range. Zero-100km/h will be achieved in “less than 3.5 seconds” and an 80-percent charge will take only 15 minutes via an 800-volt charging system, according to Mr. Pollich. Porsche subsequently announced that the Mission E will go into production by the end of this decade.

In contrast, the 2016 Porsche Cayenne more modestly supplies a range of 23-25 kilometres from its plug-in powertrain (borrowed from the Panamera). Unfortunately the battery was depleted when it came time for our test drive, with Mr. Pollich effectively admitting that at least 50-60 km is required, enabling owners to at least conceivably get to work and back using EV mode. Apparently this is forthcoming. 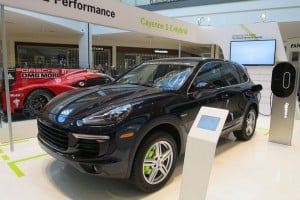 Otherwise, the Cayenne S E-Hybrid is an entirely pleasant vehicle to drive, delivering about 10L/100km on the highway and 14L/100km in the city, according to Porsche estimates at the event.

I took one for a spin (not literally) in the snowy and icy winter conditions after the presentation and found the Cayenne S E-Hybrid to be supremely stable, quiet and much more nimble than you may expect from a large SUV.