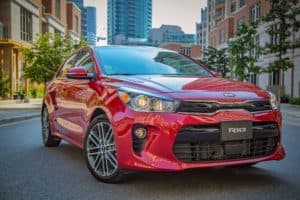 Used car dealers must be having a tough time these days. Why? New car dealers, that’s why. What with their competitive pricing, easy financing, and long, comprehensive warranties, new car deals are more attractive than ever. But the kicker, I think, is the availability of sexy new features — like heated steering wheels and advanced safety technologies — that are becoming commonplace now, but will be missing on used cars even if they’re only two or three years old.

Case in point: the 2018 Kia Rio 5-door LX MT. This is Kia’s appealing “entry-level” subcompact, starting at just $14,995. Under the hood is a peppy and fuel-efficient 130-horsepower engine mated to a six-speed manual transmission, while inside, standard equipment includes that heated steering wheel, a rearview camera, heated seats, and of course, Bluetooth phone connectivity. Add freight and taxes you’re out the door for under $19,000 in a brand new car (presumably less from a motivated dealer…). And on a cold winter day, your hands are toasty warm! 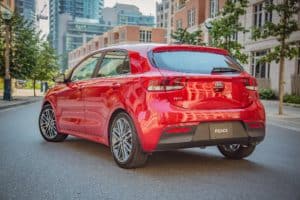 Granted you have to spend an extra $3,000 for the LX+ AT version in order to get an automatic transmission, air conditioning and cruise control, but still…

Courtesy of Kia Canada, I went top-of-the-line for a week in an EX Tech model. Cash price on this car is $24,794 including $1,560 freight, and as you would expect from its “Tech” designation, it arrives with all the latest “mod-cons” (modern conveniences, that is).

First of all, though, when I describe the Rio as a subcompact, this doesn’t mean it’s a tiny vehicle. Easily accommodating four adults, the Rio is roomy and comfortable, with a generous 493-liters of cargo capacity behind the rear seat. Drop that two-way seat and you’ll create a very useful 928L of room for your gear. A big little car, in other words. 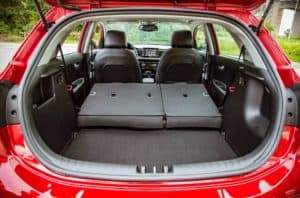 I know, I had you at heated steering wheel, right?

Of course, Kia’s counting on that. It’s part of the company’s strategy to turn heads their way. Fine quality, reliability, eye-catching design, LOTS of standard equipment and a low price. That just about sums it up. 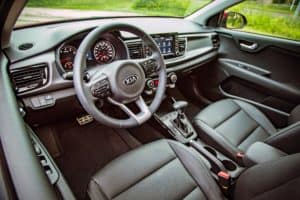 Regardless, you’ll want to drive the Rio… there is that. And I can report that it’s an agile, pleasant drive with responsive steering, a willing engine, somewhat softer braking than I expected, smooth ride, controls that are easy to identify and use, and excellent outward visibility in all directions. On ice-and-snow-covered roads, Rio with winter tires was steady and stable both from a standing start and when cornering. Stopping was straight and controlled; the rain sensing wipers worked a treat.

The 1.6L four-cylinder direct injected engine is a little harsh when starting, but is torquey and quiet under normal acceleration, with virtually no noise intruding into the cabin at speed. The six-speed automatic transmission shifts up and down imperceptibly. The instruments are simple and easy-to-read, with a driver selectable digital speedometer if desired. Fuel consumption (regular grade fuel) is rated at 8.3/6.4 L/100km, city/highway. Rio delivered on that. 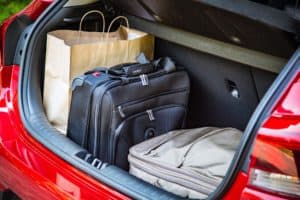 Parking was no problem, as the car is easy to position even without the rearview camera when reversing. Ingress and egress is fine; rear seat legroom sufficient but not class-leading. All in all, a thoroughly competent local runabout that’s also comfortable on longer trips.

But you might be wondering about build and materials quality from a Korean manufacturer, as opposed to Japanese, European or North American brands. Granted, Kia started at the economy end of the price spectrum when established here in 1999, seeing sales increase steadily since that time. But Kia and sister company Hyundai beat luxury-brand Lexus in J.D. Power’s initial quality study in 2017, which measures the number of problems in the first 90 days of ownership. Actually that was two consecutive first-place wins for Kia.

So, the ownership experience is off to a good start! 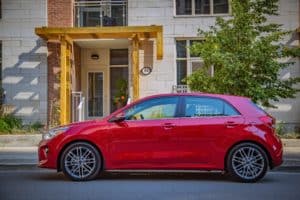 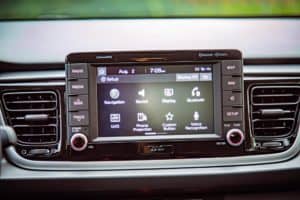 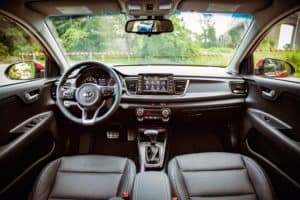