Over the past few years there’s been a lot of talk about Alfa Romeo returning to North America. Car and Driver magazine, for instance, reported in 2010 that Alfa Romeo was scheduled to return in 2012, but 2012 came and went, leaving North American “Alfisti” still patiently waiting. 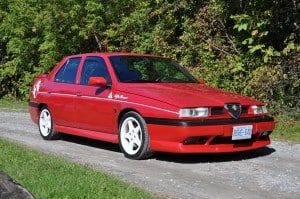 Earlier this year there was talk about Audi buying Alfa Romeo (Audi recently bought motorcycle maker Ducati, and apparently has coveted Alfa Romeo for a while, now), but the latest scuttlebutt regarding Alfa’s arrival is mid-2014 for the limited production Alfa Romeo 4C. Pricing for this vehicle has apparently been announced (for Europe at least), but for Alfa fans it’s yet more “hurry up and wait” before they see the famous Italian marque back on US and Canadian roads. It’s a developing story, that’s for sure.

But while others wait, some enthusiasts are taking a more proactive stance. Smitten by Alfa Romeo in the early ‘nineties, Ottawa resident Colin Garnett’s dream-car was the 155 sedan. Edgy and wedgy, the Alfa 155 stormed through numerous European racing series during the first half of that decade, winning many of them.

“Once I saw [Alfa Romeo 155 driver Gabriele] Tarquini taking a corner on two wheels in the British Touring Car Championshp, I was hooked,” explains Mr. Garnett.

But it’s one thing to follow your dream-car on TV, and another to get behind the wheel of one. Especially considering that the 155 was never imported to North America, and Alfa left Canada in 1989, apparently for good.

However, happily we have a secret weapon in Canada, which is that you can import almost any production car into the country if it is 15 years old, which is how Mr. Garrett was able to get his hands on an Alfa Red 155 via a Toronto dealer who imports such automotive delicacies.

Produced between 1992 and 1998, the Alfa Romeo 155 was a compact sports sedan in the tradition of the BMW 3 Series. The successor to the odd-looking (in my opinion) rear-wheel drive Alfa Romeo 75, the 155 was more agreeably styled but it was front-wheel driven, rarely a favourite of the enthusiast.

And for whatever reason, the 155 wasn’t a favourite for mainstream consumers either. Initially sales were not strong, although the cool reception heated up after revisions in 1995 that widened the car and reportedly improved build quality. And surely sales were given a boost after the 155 proved so competitive in motorsports.

As you may know, Touring Car racing features mainstream family-type vehicles modified to offer high-performance driving dynamics. Who can resist sporty sedans hurtling around a tight road course, bumping and grinding in the corners while piloted by world-class drivers? Well, most North Americans can, as it turned out… but other than that, automotive cognoscenti can’t get enough!

The 155 was offered in several variants over its short model run. Four-cylinder, six-cylinder and diesel-power were available, with a few 2.0-litre turbocharged “Q4” all-wheel drive cars being the rarest. Colin Garnett’s 1997 model is powered with an aluminum alloy 2.5L SOHC V6 engine making 162 horsepower (121 kW) at 5,800 rpm and 159 pound-feet of torque (216 Nm) at 4,500 rpm (specifications from the 155 Repair Manual). Matched to a five-speed manual transmission, his car’s optional Speed Pack features Recaro sport seats, rear spoiler and 16-inch Speedline wheels. An aftermarket Zender body kit was added by a previous owner.

Although it’s still a comparatively new vehicle (as far as collector vehicles go), the 155’s angular wedge profile — popular with most car manufacturers from the 1970s through the 1990s — dates it now. In fact, the successor the 155, the 156, uses a completely different shape, eschewing straight lines for soft curves.

Consequently, it’s not only the Alfa Romeo grille and bright red paint that makes this car distinctive on the road today. That profile and the fabulous condition of Mr. Garnett’s car immediately draw your attention to it (along with the sharply contrasting white wheels, of course).

On the road you just love those heavily bolstered Recaro seats which provide excellent lateral support without sacrificing comfort. The seats are tastefully embossed with the Alfa Romeo logoscript for an added element of distinctiveness, as are the sill covers.

The white-on-black major gauges are protected from the sun in a carbon fibre-style housing, and while it has its share of hard plastic surfaces, the interior is welcoming and ergonomic. The square push-buttons on the centre stack are tidy and pleasantly tactile, unlike today’s touch-screen and voice activation. 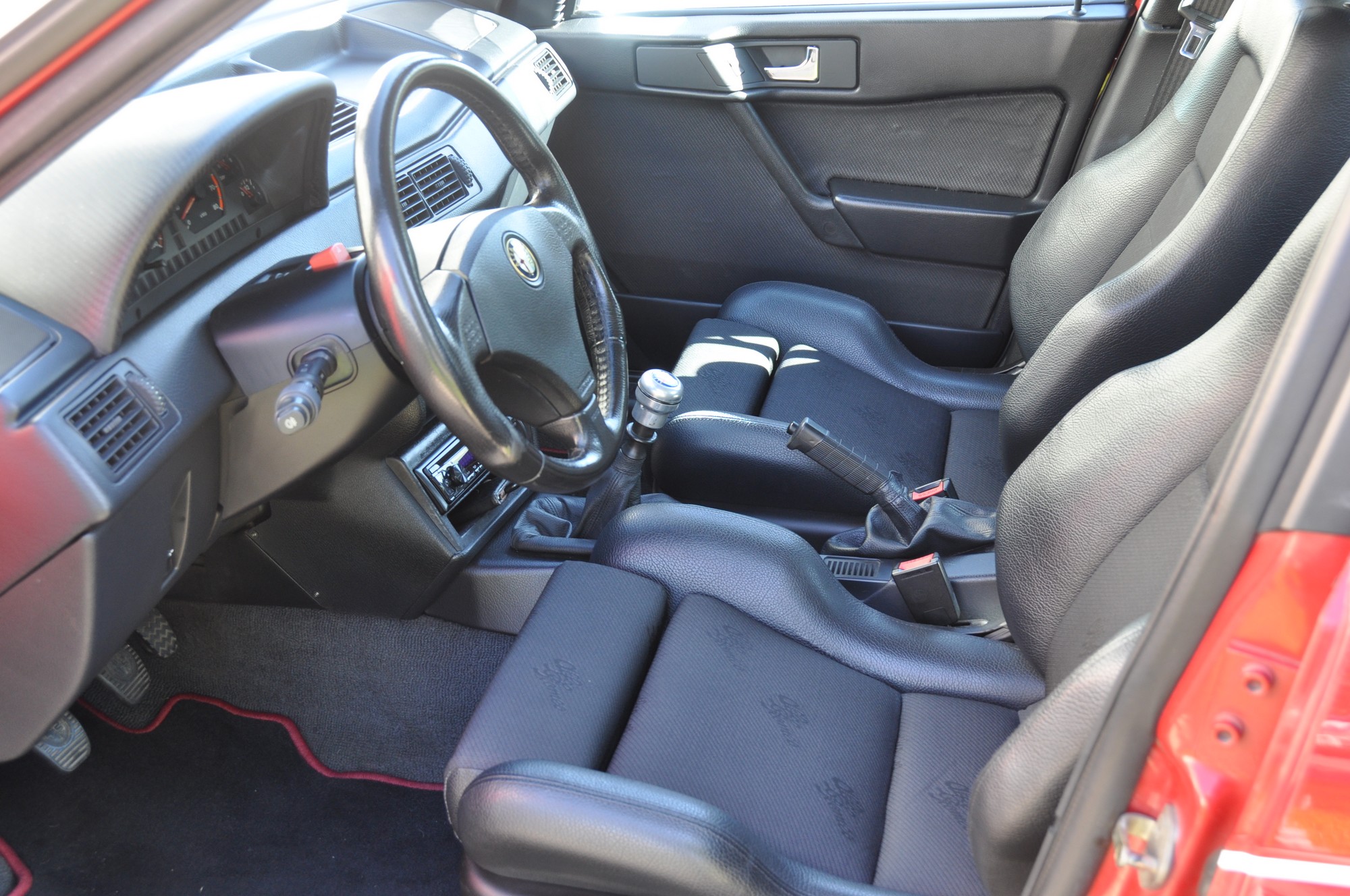 The high-revving engine is super-smooth as you proceed through the gears with short, precise and compliant throws. The steering is light and accurate, the Alfa responding obediently to every command – not too much, not too little — its braking, steering, acceleration and balance is just right.

What a fun drive, but obviously this is no muscle car. It’s more about refinement and responsiveness (and a great sounding, high-revving engine) than grunt. For zipping around town or navigating a twisty country road, the 155 feels more like a roadster than a sedan, front-wheel drive notwithstanding.

But sedan it is, with a decent-sized rear seat for kids/dogs/friends and a massive 525-litre trunk for your gear. While there were a few minor issues to attend to (a balky turn signal stalk, an unwilling clock, a couple of trim items) this Alfa was running fine, with no unwelcome noises from the drivetrain or suspension. With something over 90,000 kilometers and 16 years on it, this car still felt solid and looks almost like new.

Not destined to be a trailer queen, Mr. Garnett plans to take his dream car to Calabogie Motorsports Park for lapping days, and is driving it at every opportunity. It’s likely the only example in Eastern Ontario, and surely one of only a handful in North America. This suits its owner just fine, who says there may be less than 200 of this model on the road worldwide.

Ottawa has an active Alfa Romeo club and an enthusiastic Italian car community. Unfortunately, this car will go into storage soon, as collector cars in Ottawa all hibernate for the winter.

For a look at current Alfa Romeo models, check out the company’s website at www.alfaromeo.com.