2014 Mitsubishi Mirage – You can do better 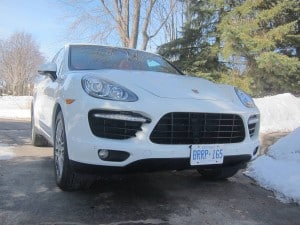 It was nice to get into a Porsche again. This is a company whose vehicles offer a singular combination of prestige, history and superior quality. They’re the real deal, in my opinion.

The Cayenne is Porsche’s big SUV. Controversial when introduced over a decade ago (it’s a Porsche SUV, after all), it now represents the most popular Porsche you can buy.

My test vehicle was a Turbo S model powered by a 4.8-litre V8 engine making 550 horsepower and 553 pound-feet of torque. As you might expect, that kind of power doesn’t come cheap. The base Cayenne, in comparison (interestingly available with a manual transmission) arrives at comparatively modest $57,900, while the opening price of the Cayenne Turbo S vaults it to $166,600. 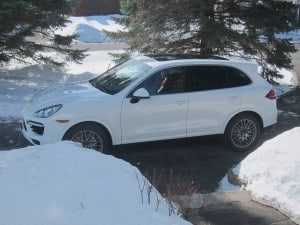 As you can see from the pictures, this Cayenne was white, which, as it turned out, perfectly matched the environment in which it was driven for the duration of my experience behind the wheel. We’re talking snow, and lots of it. So much snow that the Cayenne Turbo S’s declared 4.5-second acceleration from 0-100 km/h could only be imagined if you wanted to stay on the road.

In an attempt to find somewhere we could actually drive this vehicle at four-fifths or even three, the decision was made to head south from frigid Ottawa and its winter-weary inhabitants, to the usually warmer Niagara Peninsula in search of blue skies and people with a correspondingly sunny disposition.

Didn’t happen. We got there all right, but Niagara was uncharacteristically walloped with the storm-of-the-decade, and the locals were in no mood for happy banter. About 50 centimeters of white goopy snow plopped on top of the region and by the time we drove into Niagara-on-the-Lake at 3.00 pm, the entire town was closed. Except for the liquor store, that is, which we optimistically visited only to find employees busy shutting the place down and making a run for it. 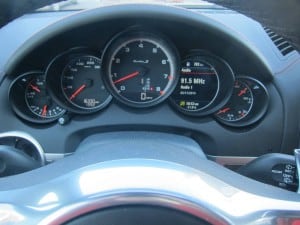 Tellingly, the Cayenne Turbo S is a safe harbour in weather like this. We’re talking two-foot high snowdrifts across the road, 60-80 km/h winds and nothing but ice for the stability control system to battle. But nonetheless, we were good. Really, there was no one else on the road, not even snowploughs, and we found ourselves motoring around looking for something to do. 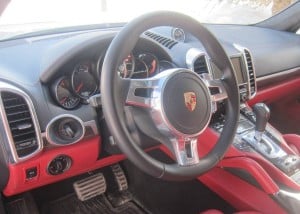 I should mention that I found the interior of the Cayenne Turbo S – all red leather and carbon fibre with enough controls to suggest you were piloting a Boeing rather than an SUV – a great place to be. I loved all the screens and levers, switches and knobs, the flash of chrome, the smooth, technical surfaces.

However, earlier that day upon entering the Cayenne Turbo S for the first time my partner Susan was aghast.

“Your point?” I thought, without putting it quite that way.

Now don’t get me (or her) wrong. Susan loved the 911 we drove last year. She could see herself in that, no problem. But this big SUV with its admittedly… um… “comprehensive” set of controls and flash interior didn’t impress her at all.

Except when driving it. That’s when Porsches work their magic as you cruise along feeling safer and more confident than you have in any other vehicle, whatever the conditions. And maybe a little smug, too, because after all, you’re driving a Porsche and most everybody else is not. 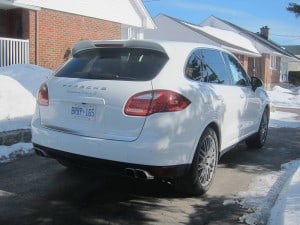 The exterior of the Cayenne – Turbo S or not – failed to deliver excitement from anybody we encountered before, and especially after we told them the price.

Well, it’s under the hood and in the drivetrain and in the build quality and the badge costs a bit, too. But I take their point. As much as I enjoyed driving the big Porsche, Its monster price tag is hard to justify.

Yes, I was glad to be in it, especially during brutal driving conditions that literally sent everybody in the area scurrying, but I didn’t miss it when it was gone (the $135.00 I paid to fill the tank may have had something to do with that). So… is the Cayenne Turbo S the real deal?

Back in Ottawa I casually mentioned to Danny my hair artiste that I just drove a 2014 Porsche Cayenne Turbo S.

“Why the Cayenne?” I asked.

“That,” he said, while pointing for effect with his Solingen scissors and nodding solemnly, “is an SUV!”

Well, there you go. I think that gets at the heart of it.